Makhadzi the star of Tshima launch

The créme of Tshivenda music will once again shine during the fifthTshivenda Music Awards (Tshima) to be held at the Thohoyandou Town Hall on 29 September.

Attended by the captains of the industry, the who’s who of the local entertainment industry, politicians and stakeholders of the Tshima Awards, the final nominees were announced at the Nandoni Riverview Resort just outside Thohoyandou.

The founder and project director, Mr Augustine Nethononda, said that the event was a platform to uplift the plight of local artists and to celebrate their God-given talent while they were still alive. “It’s the pinnacle of the growth and development of local music as we continue to create tomorrow’s legends today,” he said.”

Cllr Mavhungu Ramakhanya of the Venda District Municipality praised the organisers and the musicians for the good work they are doing to uphold culture through their music. She urged musicians to continue producing educative music and further pledged the support of the VDM to the project.

This year, the participants will compete in 15 categories.

Speaking at the event, an excited Makhadzi, who had an electric performance earlier on for President Cyril Ramaphosa during an event at Matsila, said she was humbled by the response. "This is the culmination of the year's hard work. I started this career as a very young girl and have worked very hard to be where I am today. I am happy that the country is now recognizing my talent and with the support I am getting, nothing will stop from reaching the stars," she said. 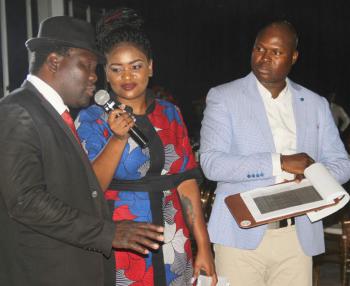 Some of the nominees, sponsors, and the mayors of Thulamela and Vhembe during the event.

Jazz maestro Lwei Netshivhale entertained the guests during the event.