Khathu's voice is felt in the industry

Khathu Dzaga is a woman of many talents, but her strong passion finds its expression in music.

Born and raised in Thohoyandou Block G, Khathu has stolen the hearts of many people with her exceptional personality and, of course, her dulcet voice. She does not limit herself when it comes to music, so she can sing to almost every tune or beat.

“I am a songwriter and a recording vocalist,” she said. “Most of my songs are love songs because I am a woman of peace and integrity. I believe in healing through music. So, if you ever feel like you want to listen to something you can relate to, I'm your girl.”

She had discovered her singing talent in 2008 when she used to scribble words in her notebook. She initially saw those scribblings as poetry, which she shared with friends.

“I attended a Christian school where we had scripture union Thursdays, and that's where I recited my poetry and sang some songs that I had written,” she said. “My teacher then would always ask me to stand in front and teach the others, and that was when I realised that I could actually sing!”

She turned her poems into songs that she then performed. “Since then I started writing more and I would often gather my friends and give them little performances before school started,” she recalled. “Their reaction played a huge role in helping me believe in myself as an artist.”

She stated that music to her was a pillar of strength. “I get to express myself when I go through the different trials and tribulations in life because, honestly, this life thing is hard,” she said. “For me, music has made life more containable; music is my best friend.”

When she writes a song, she tries to accommodate everyone – young and old. “We don't have to exclude, because love is light,” she said.

She has had her highlights in the industry, which are mostly getting recognition from established musicians who know their story in the industry. “It's a really good feeling when legendary artists approach me intending to work with me,” said the mechanical engineer in the making. “It has made me realise that I am capable.”

Khathu's hit songs include, among others, Holding on, A thi sali, and Never give up (with Romeo). Her music is available online.

She is available on Facebook and other social media platforms. 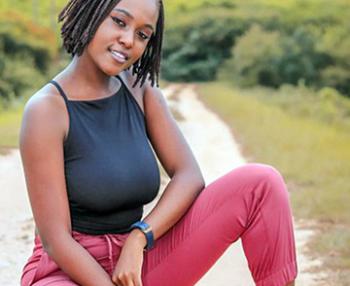