Stringman a teacher and successful musician

Shufflers Ragimana, Burning Saul Nephawe, Ras Willie, Ramzeey Ramalata, Nelson D, 30 Mrepa, Uncle Podoski, Papa Thile, Tsiko Mal. These are some of the musicians from Makonde village who continue to put their beautiful village on the musical map. However, the list is incomplete without Phillip “Stringman” Tshililo, the man who has been instrumental in the development of the musical careers of his colleagues at Makonde village.

Over the years, Tshililo has successfully displayed that shuffling between his roles as a teacher and a successful musician is possible. He teaches physical sciences at Miriyavhavha High School at Ha-Khakhu village.

Tshililo says he is perceiving the lockdown in a positive way.  “We are locked at home to prevent the spread of the coronavirus, and it is affecting us very negatively. However, this is the time that we can use to rebuild ourselves and face the future with pride. The lockdown is giving me enough time to work on my fifth album.”

Tshililo started his musical career in the early eighties. “I started playing music with the now-defunct Thinawanga Band under the leadership if the late Azwivhavhi Ndou. We used to play home-made guitars made of old oil tins and rubber bands. The recording studios were only found in Gauteng and it was very difficult for us to go there. We would then use a tape recorder to record our music and enjoyed listening thereafter.”

He said things turned better when the then Radio Venda sound engineer, Mr Stinka Munaka Ramunenyiwa, spotted Thinawanga Band and recorded them. “He came and recorded us, and it was a dream for us to hear our music on radio for the first time. With the improvement of technology, we bought electric guitars, but unfortunately, Thinawanga Band ceased to exist. I continued playing music individually, until I went to the studio and released my first album in 2009.”

A keen lead guitar and pennywhistle genius, Tshililo has so far released four successful reggae albums, namely Milingo, Mutondi, Shaka Ndi Nnyi and Faranani. “I’m working on my fifth album, which will be released after the lockdown. This will be dedicated to all my fans, and I will be giving them the message of hope that they should know that life has to go on even after the lockdown.”

He encourages young musicians to seek education first before venturing full time into the music industry. “Sometimes, the entertainment industry is rough, but one must always have something to depend on when things turn bad in the music industry.” 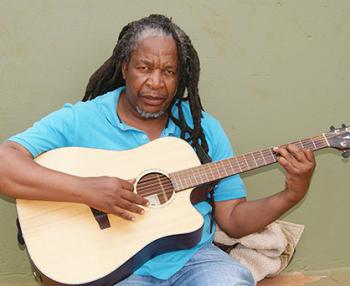 Phillip Stringman Tshililo is successfully shuffling between his music and teaching careers.