Just two days after Limpopo Mirror published the article titled Razzmatazz resurrected in form of Masindi, the two radio wizards met for the first time and held a special broadcast in celebration of their union.  The article was published on Friday, 19 June, about a radio presenter of Vhembe FM, Mulalo DJ Mawelewele Masindi, who was inspired by the former legendary presenter of the then Radio Thohoyandou and Radio Venda, Russell Razzmatazz Mashige.

DJ Mawelewele said he was excited to have met his role model through Limpopo Mirror. “After reading the article, Razzmatazz called me, and I went to his home in Shayandima. He said he was very impressed about what he had read and was very happy. We talked about the art of radio for many hours, and he gave me some tips on how to become a top radio presenter.”

Mawelewele continued: “I was impressed by the radio presentation skills and musical knowledge of this legend during our show. He is indeed a legend, and I was so honoured to share the studio with him. Meeting my role model was the highlight of my radio career, and I thank Limpopo Mirror for publishing the story. Indeed, Limpopo Mirror has changed my life.”

On the other hand, Mashige said he was also happy to have inspired young people in the radio fraternity. “When I talked over the phone with DJ Mawelewele before we met, I felt like I was talking to myself because his voice is exactly like mine. DJ Mawelewele is such a brilliant and energetic presenter who will definitely go far in his career. The show was so interesting that it reminded me of my good old days at Radio Venda and Thohoyandou.”

He said he was impressed by the calls and messages from listeners during the special show. “Calls never stopped ringing and they didn’t want me to leave the studio. That was a very interesting moment that I will always cherish. At least everyone now knows that their legendary presenter still has a lot to offer. Radio is in my blood, and I will love it until my last day on earth.” 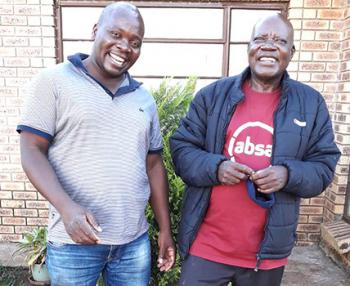 The power of Limpopo Mirror… DJ Mawelewele (left) photographed with his role model, the legendary Russell Razzmatazz Mashige, before the two went for a special broadcast on Vhembe FM. Photo supplied.