The first album, Ndikhouombaomba, was released in 2016, followed by the second, called Ipfilawe lina Maanda, in 2019.

Tshaphanda comprises eight tracks, including Dzula nne nne, Tongai and Linamanda, and has already proven to be very popular among Ncube’s fans. He composed all the songs on the album himself.

Ncube is back after a ‘leave’ period from the music scene. “Piracy,” he says, “is an unfortunate reality which local artists are also faced with. It costs a lot to come out with a quality album. We spend a lot of time trying to be creative, but after the release of the album, it can be bought from anywhere for a mere R5 or R10. It is very stressful and depressing to find your sweat and toil on street pavements, being sold for next to nothing. We tend to lose focus from our creativity as we are not the ones reaping the fruits.”

But his love of music is what keeps him going; otherwise, he says, he would have quit a long time ago. “I made a few changes to my new music. The album is already in great demand and has started receiving massive airplay on community, regional, and national radio stations. I am very happy and proud of the way my CD is received by my fans out there. This is a true reflection that my music is mature and appeals to all age groups,” Ncube says.

Although the album is self-marketed, many copies have already been sold since its release. According to the music critics, he is gaining great popularity among gospel music lovers because of his unique style, which consists of heavy bass sounds. He sings about personal experiences and what he observes.

Ncube says they will continue doing what they love best, namely providing quality music to their fans, no matter the odds. “We appeal to the authorities to help us in the fight against the scourge of piracy by arresting and giving pirates heavy penalties,” he says. 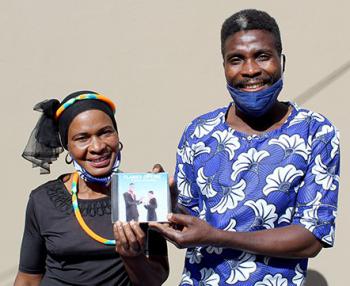