Khoroni Hotel is not just a lavish hotel when it comes to accommodation and entertainment, but also has staff with soft, caring hearts. This was proven last Friday when Khoroni donated wheelchairs to three intellectually impaired children at Tshilwavhusiku-Razwimisani Special School. The hotel also donated Bosch machinery to use in the woodcraft training department.

According to Ms Mashudu Muthuli, the public relations officer, the donation was part of the hotel’s social responsibility programme. “We always invest back into the community that we do our business in,” she said.

She added that the donation was also the beginning of good things to come. “This is just a start and we will come back with more, next time we visit the school.” Muthuli, who also has an intellectually impaired child, said she was touched by the plight of the children at Tshilwavhusiku-Razwimisani. Muthuli also pledged to donate school uniforms to the school in January next year.

It was an exciting, happy day for the children at the school, as the hotel had also organised a Christmas party for them.  Situated at Ravele village in the Makhado Municipal area, Tshilwavhusiku-Razwimisani Special School takes care of more than 300 intellectually impaired children within the Sinthumule and Kutama areas.

The donation came a week after the Deputy Speaker of the Limpopo Legislature, Ms Miriam Ramadwa, who had celebrated her 50th birthday at the school, had donated stationery to the school. Ramadwa, who recently adopted the school, said that she would continue engaging local businesspeople to assist the school.

The chairperson of the board of governance at the school, Musanda Vho-Piet Ramabulana, expressed his appreciation for the donations. 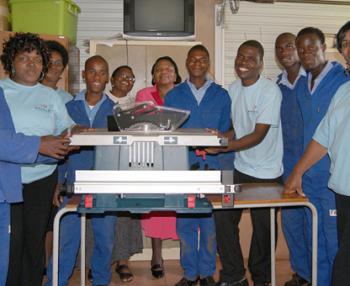 Khoroni Hotel has brought hope to intellectually impaired children of the Tshilwavhusiku-Razwimisani Special School by donating Bosch machinery for woodcraft.

The hotel also donated wheelchairs to three children at the special school.

Peter Muthambi graduated from the University of Venda with a Bachelor of Arts degree in Media Studies. He started writing stories for Limpopo Mirror as well as national papers in 2006. He loves investigative journalism and is also a very keen photographer.