During her keynote and launch address, Mayor Carol Phiri said the day marked a very important milestone in the fight against HIV and Aids in the Musina municipal area. She said the Musina Aids Council was a part of the South African National Aids Council (SANAC), which would also carry out the task of overseeing and advising the municipality on HIV and Aids issues.

“This means that the municipality will now be strengthened in fighting this scourge. The objectives of this municipal structure are not different from SANAC’s. The local structure will advise government on HIV, AIDS and sexually transmitted infections (STI) policy and strategy. It will also create and strengthen partnerships for an expanded national response to HIV and Aids. The other obligation will be to oversee continual monitoring and evaluation of all aspects of the National Strategic Plan on HIV, Aids and STIs and to receive and disseminate reports on all sectoral interventions to HIV and Aids and consider dealing with the challenges thereof.”

Phiri said in order to meet the need for testing and treatment, the council will work to ensure that all the health institutions in the Musina municipal area are ready to receive and assist patients and not just a few accredited ARV centres.  “Any citizen should be able to move into any health centre and ask for counselling, testing and even treatment, if needed. On this note I would like to encourage all the community members, stakeholders and organisations to work with this council.”

She said government had, over the years, also been dedicating a lot of resources to prevention, treatment and care for those infected and affected by HIV and AIDS and she had no doubts that the newly launched council would help government in achieving these goals. 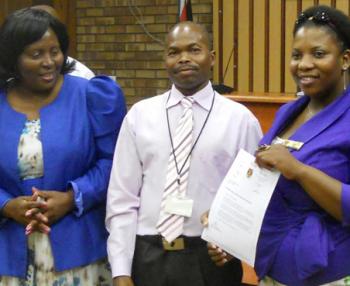 The CEO of the Messina Hospital, Mr Simon Netshivhambe (centre), Cllr Faith Chauke of the Vhembe District Municipality (left) and Musina Mayor Carol Phiri, photographed during the launch of the Musina Aids Council.

Correspondent journalists from all over the region supply us with news and sport articles.