Residents of Malamulele and surrounding villages sighed with relief after being told that their problems will receive urgent attention.

This was after they had spoken in one voice that they wanted nothing less than municipal status, accusing the local Thulamela Municipality of neglecting them in terms of service delivery.

This transpired during a meeting at the Malamulele Stadium last Monday afternoon, where they were addressed by the Minister of Cooperative Governance and Traditional Affairs, Mr Richard Baloyi. Baloyi said he had visited several villages falling under traditional leaders and he was shown projects like water purification schemes. He also had the chance to see for himself the state of the roads in some of the villages.

He added that he had had time to talk to some officials, who promised that some of the projects would be finished soon, while some were still facing challenges. In his address, Baloyi covered issues like the provision of water and poor road infrastructure.

A community leader, Dr Wisani Nkuna, said the minister's speech had covered everything they were concerned about and that they should wait for the minister to come back as he had promised to investigate their concerns and to come back before the end of September.

In an interview, Nkuna said the residents had done some research, which revealed that Malamulele qualified to be a municipality on its own. He said they had engaged in discussions with the demarcation board about the issue on several occasions, but nothing had come of it.

“We are happy that the Minister touched on issues that are pertinent to our hearts. Our demand is based on facts. Malamulele has enough wards, with a population of well over 500 000. It has a solid economic base, with many business avenues that could be explored, and it can stand on its own,” he said. 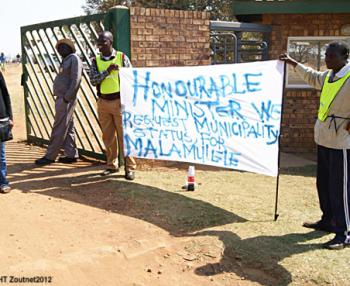 The writing is on the wall ... people are saying it loudly and clearly that they want their own municipality.

Min Baloyi addresses residents during the meeting. With him in the photo are the mayor of Thulamela, Cllr Grace Mahosi (left), and the deputy chairperson of the House of Traditional Leaders in Vhembe, Hosi Eric Mudavula.