In a dramatic turn of events, charges against the Indian couple from Makhado (Louis Trichardt) accused of being accessories to a gruesome muti murder were dropped on Wednesday afternoon. This followed after the alleged muti murderer admitted to the police that he had lied about the couple’s involvement.

Musha Isap Ali Patel (62) and his wife, Hasina Muska Patel (60), the owners of Elti Café in Eltivillas, were arrested on Friday after a human arm was discovered. The police questioned them along with the main suspect,  Freddy Azwitamisi Tshikhudo (38).

Tshikhudo apparently told the police that he had been promised R70 000 and a motor vehicle by the Patels for supplying the hand, which was to be used for muti purposes.  All three of them briefly appeared in the Louis Trichardt District Court on Monday.

He led them to the bushy, mountainous area on the corner of Celliers and Songozwi Street, near the Grasdak Guest House. There, in the early hours of Saturday morning, the police found the mutilated and already decomposing body of the woman. Her arm and private parts had been cut off and both her eyes had been removed, apparently while she was still alive.

The police also found, lying next to her body, a pair of grey trousers, a red bra and white socks that she was wearing. She has medium-length dark brown hair. The woman’s body was left to rot more than a kilometre into the bushy area and the police had to struggle for hours to clear the way into the bushes with pangas. Apparently, she had already been killed the week before, on 27 March. Her remains were finally airlifted from the bushes with the help of a police helicopter.

According to Capt Maano Sadike, the spokesperson for the Makhado police, the woman was lured to the bushes by her boyfriend under the pretence that they would be performing a prayer ritual for her. After the couple had finished praying, the woman was ordered to undress, and when she refused, she was overpowered and killed by Tshikhudo.

On Wednesday, the story took a dramatic turn when the Patel couple appeared in court again.
Tshikhudo apparently made a statement wherein he admitted that he had tried to rob the Patel couple at their shop in Eltivillas. The police also found new evidence that may have pre-empted his further confession.

Desmond Mphaphuli, attorney for the Patel family, said he pointed out to the investigating officer that there are inconsistencies in Tshikhudo’s version of events. On Monday it was established via DNA testing that the murdered women is a Zimbabwean, not Asian, and was Tshikhudo’s girlfriend. It also became clear that Tshikhudo entered the shop with the body part in his pocket and acted as if he found it in the freezer.

Tshikhudo apparently entered the shop with the intension of robbing the Indian couple. When his mission failed, he waved a human arm in the shop to scare customers away. His intention was probably to loot the shop in the absence of the owners and customers. The statement that he was employed by the Indian couple to kill an Asian woman for them was a fabrication.

The Patel family spokesperson, Nazeer Drivah, said it will be difficult for the Patel couple to be trusted by customers, because of Tshikhudo’s lies. He said the elderly Indian couple were praying for most of the time while in custody in the police cells. After being released they were treated by doctors and will also have to receive further counselling.

“We are supporting them because they are innocent. It is just a pity that customers are running away and the shop is still closed,” said Drivah.

The chairperson in the Vhembe district for the association that represents traditional healers, Vho-Mbilivhili Neluvhola, pleaded with people to have a mind-set change and stop believing that human body parts could be used to increase business.

“Big businesses in South Africa are thriving while businesses of those who believe in using human parts have closed down,” said Neluvhola. Neluvhola said that his organisation do not support acts of ritual killing as parts removed from human beings cannot make muti. “Killing people for muti purposes is uncalled for,” he said. “Healers who are involved in ritual murder cases are not even registered with our organisation.”

Makhado police spokesperson, Capt Sadike, tells of the discovery made on Friday 5 April 2013

Police find the remains of an unidentified woman in a bushy area in town. The body is airlifted out of the bush due to the dense bush. 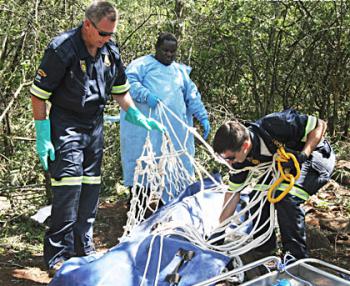 Freddy Tshikhudo (38), followed by Musha Isap Ali Patel (61), on their way to the court room during their court appearance in the Louis Trichardt Magistrate´s Court on Monday.

The remains of the unidentified woman who was murdered during a muti-ritual are being prepared to be airlifted from the bushy area where she was found. The alleged murderer, Tshikhudo, led the police to the location of her remains in the bushes between the Grasdak Guest House and the Soutpansberg golf course.

Attorney Desmond Mphaphuli (right), legal representative of the Patel couple, leaves the court on Monday. At the back is the alleged murderer, Freddy Tshikhudo.

Hasina Muska Patel (60) is followed by her lawyer, Desmond Mphaphuli, from the holding cells to the court room during her brief court appearance in the Makhado Magistrate´s Court on Monday.

A pathologist carries the human arm that was discovered in the shop, Elti-Café, belonging to the Patel couple of Makhado (Louis Trichardt).