The Limpopo Bushveld is home to a new state-of-the-art photovoltaic (PV) plant that will connect 66 megawatt (MW) of power to the national electricity grid.

This renewable-energy unit of the Italian energy group Enel was constructed at Tom Burke, raising its installed capacity in the country to nearly 160MW. Enel started construction of the PV plant in March 2015. “The power produced by the Tom Burke power plant is injected to the national power grid, and will be fully available to the people of Limpopo,” said Enel on Monday.

The Tom Burke PV plant is capable of generating up to 122 gigawatt-hours a year, which is equivalent to the annual consumption needs of around 38 thousand households, while avoiding the emission of over 111 thousand tonnes of CO2 into the atmosphere each year. The plant is also supported by a 20-year power purchase agreement with Eskom, having been procured through the government’s Renewable Energy Independent Power Producer Procurement Programme (REIPPPP).

Through the REIPPPP, the government has procured 6 377 MW of renewable energy since 2011, stimulating private investment of around R200 billion. The evaluation of bids for a further 1 800MW allocation is underway, which could increase the investment amount to more than R255 billion.

In South Africa, Enel’s South African renewable subsidiary Enel Green Power SA currently owns the Tom Burke plant and, in addition, the 10 MW Upington PV power plant situated in the Northern Cape, and a further 364MW of projects that are currently under construction. They are the Adams (82.5MW) and Pulida (82.5MW) PV plants and the Nojoli (88MW) and Gibson Bay (111MW) wind farms.

Enel expressed the hope that they would be able to secure similar projects to develop more solar plants within the Limpopo Province. “We are currently exploring other investment opportunities all over South Africa and including, of course, Limpopo, a province very rich in solar resource. Enel Green Power is currently proceeding with an approximately R20 billion investment plan in the country. We are also considering investments in other Sub-Saharan countries. Recently we were awarded a 34MW photovoltaic plant in Zambia, through a public tender,” said Enel. 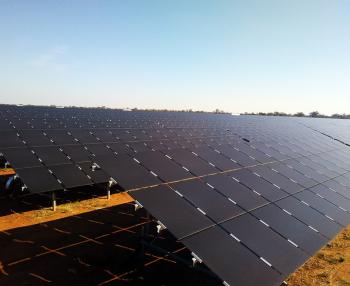