Angry Nzhelele residents on the rampage

Enraged residents in Nzhelele went on the rampage last week and barricaded the R523 road. They were burning tyres and blocked the road with stones and debris, preventing motorists and taxis from operating. The protest action left Nzhelele looking like a war zone.

The unrest follows after an elderly woman was raped a fortnight ago and two pupils were killed. The residents were seemingly fed-up with such incidents of crime and decided to take the law into their own hands. The residents searched around the villages, looking for a suspect who had been released shortly before the protests. The case was withdrawn, with the authorities citing a lack of evidence.

The rampage prevented some pupils from going to school, because there was no transport. Some of them were forced to walk many kilometres to and from school. A pupil from the affected school remarked: “This rampage is really affecting me as I am supposed to walk more than five kilometres to go to school. I arrive at school tired.”

Many pupils in the affected area were released early from their respective schools, so that they could reach their homes quickly as there was no transport. Thousands of commuters were also left stranded and many workers did not report for work because of the barricaded roads.

A concerned resident told Limpopo Mirror that the residents were not satisfied with the way the police were handling the case. “We fear that while the suspect is roaming the streets, he might continue with his gruesome crimes. The police should not have released the suspect immediately. They should have locked him up until the case has enough evidence. Now they have provoked us,” he said.

Many shops in the Nzhelele Valley at Biaba were forced to close when residents ran amok. In Mamvuka, foreign-owned spaza shops were also forced to shut down, due to fear of looting, while in some villages the shops were looted.

A businessman, who asked not to be named, said that the angry crowd forced him to close his shop. “They wanted to loot my shop, then I decided to close it,” he said.

A large number of police officers was sent to the area to stabilise the situation. The police used rubber bullets to disperse the protesters, but this did not have much of an effect. According to the police spokesperson, Lt-Col Moatshe Ngoepe, 40 people have been arrested for public violence so far. “The suspect who was linked to those crimes was arrested and then released, because the case was lacking evidence,” he said. He further said that the police would continue to monitor the situation and they were trying by all means to normalise the situation in the area.

He also encouraged the people to refrain from public violence and damaging government property. 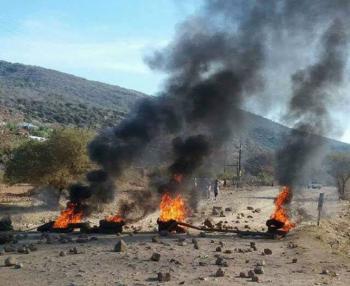 One of the roads barricaded by the protestors.

The dustbins and bricks that were used to block the road at the Nzhelele Valley shopping centre.

The R523 road that was barricaded, preventing motorists from reaching their destinations.

The R523 road that was barricaded.

Pupils were released from schools early because of the protest action.