A mysterious fire, of which the origin is being investigated by police, completely razed the Joe Matsila Guest House at Matsila outside Vuwani.

Chief Livhuwani Matsila, the founder of Matsila Development Trust that owns the lodge, said the fire started at around 13:00. He said the cause of the fire is not known so far.

Many members of the community from Matsila and neighbouring villages gave their all in trying to extinguish the flames, but the fire was too strong. The fire consumed the whole building before firefighters could arrive.

Shortly after news of the fire was known, messages of sympathy and support started pouring in. Premier Stan Chupu Mathabatha also sympathised with Chief Matsila and his community for their loss.

A comprehensive report will be published in our next edition. 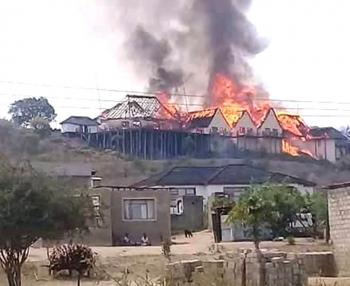 The burnt out shell of the Joe Matsila Guest House at Matsila outside Vuwani. Photo: Limpopo SAPS