The community of Lwamondo received royal praise on Friday during the opening of a bridge that was constructed by the community.

Thovhele Calvin Nelwamondo, one of the longest-serving senior traditional leaders in Vhembe, praised his community and the chairperson of the Munna Ndi Nnyi Men's Forum, Mr Bardwell Mufunwaini, for the role they were playing in developing their area.

Nelwamondo said during the opening that the time of waiting for handouts was over and that they should stand on their own and develop themselves. He added that he was very concerned when he heard about the crimes taking place at the area where the bridge was constructed.

“We are very elated as leaders of this village that our subjects have come out with this innovative idea. In the olden days, people used to do things themselves like building schools and the construction of roads. We did not wait for government and this is the message we are preaching today.” He said the travelling distance from the village to the main road leading to town had been halved because of the new bridge.

Thovhele Thivhulawi Makumbane of Tshisahulu, which borders Lwamondo, also praised the community for being innovative. He said he would also preach the gospel in his area for people to start their own development and not wait for the government for everything. He said he would approach Thulamela Municipality for the maintenance of the road. 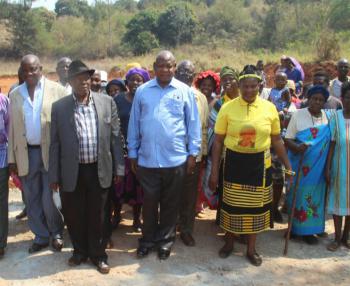