Plans are afoot to honour the fallen firefighter from Vhembe, Mr Meshack Muedi.

The community of Dzwerani Mahematshena outside Vuwani is to celebrate the life of the fallen firefighter in style by hosting a soccer match in his honour. Muedi (38), who worked for the city of Johannesburg’s fire department, passed away while fighting a raging fire at the Bank of Lisbon building in Sauer Street in Johannesburg last Wednesday.

He is to be buried at the local Dzwerani cemetery on Saturday.

According to some villagers, Muedi has done a lot, including the development of soccer, among the youth in his community and in recognition of his good works and as a celebration of his life, a soccer match will be held on Saturday after his funeral.

A WhatsApp group, "Meshack The Hero", has also been started by his friends to coordinate his funeral.

Community leader Thomani Thabela, who grew up with the late fireman, described him as a selfless, born leader who put the interests of others before his own.

"Muedi was an asset in this community; he strived for development in this village. He, together with his friends, rescued the local Mahematshena Flying Birds FC with registration fees for the 2017/2018 season, referees’ fees, transport to matches and a soccer kit. He was instrumental in the founding of the Kha Ri Lisuke Men's Club, aimed at empowering local men to be responsible family men, who would make a positive contribution in their families and the community.”

He was also described as a staunch church member, well-known as a master of ceremonies in church and a church choir member at the Khumbe Independent Apostolic Faith Mission Church.

"We will never forget him. When he was around, we would gather as young men of the village and have our braais while, at the same time, sharing experiences and helping solve those with challenges," said Thabela.

The soccer match will be between a squad comprising men from the village and Mahematshena Flying Birds FC.

A memorial service in his honour is to be held on Friday at the Khumbe Independent Apostolic Faith Mission Dzwerani Mahematshena. 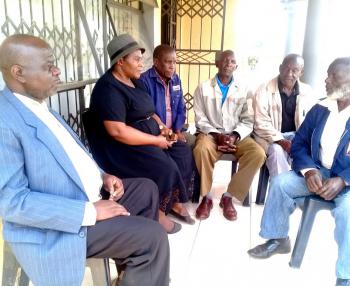 The grief-stricken Muedi relatives commiserate with the family over their loss, following the death of Meshack Muedi.