The Limpopo Gambling Board has promised to act swiftly against illegal gambling outlets operating in the Vhembe District.

This follows complaints about one such outlet that operates from premises in Songozwi Street, Louis Trichardt.

The gambling outlet near the corner of Songozwi and Grobler Street (opposite the municipal caravan park) opened its doors at the end of last year. No signboards outside the shop indicate what type of business is being conducted. The only indication that the place is a gambling operation is the security guard at the entrance and the absence of any windows. When one of the attendants was asked what the name of the company was, she answered that it was Cybernet.

Limpopo Mirror decided to find out what is happening inside the business and sent in an undercover “punter”. What quickly became clear was that the place is one where you can gamble and try your luck with a variety of online games. To enter you need to pay a minimum of R30, which then gets loaded onto your profile. You are given access to a touchpad monitor where you can choose what game of chance you prefer. You then use your money as credit to play online. If you win, you then collect your winnings at the counter and leave.

The Limpopo Gambling Board (LGB) was contacted to find out if this was a legal operation. The LGB is tasked with ensuring compliance with the various gambling Acts. The spokesperson for the Board, Naomi Molepo, said that only nine legal gambling outlets were registered in Louis Trichardt. She provided the names of these outlets, but Cybernet’s name was very clearly not on the list.

Online gambling is illegal in South Africa and participants may face hefty fines and prison sentences if found to be involved.

The Casino Association of South Africa (CASA) has on numerous occasions embarked on a journey to teach the public about the dangers associated with these illegal activities. According to CASA, one of the problems exacerbating illegal gambling is that many people simply do not know that online gambling is illegal.

Previously, the association released a statement in which it indicated that online gambling was unregulated, and it allowed the operators to take advantage of their players. This means that absolutely no guarantee exists that the player’s winnings will be paid out and, should a dispute arise, no recourse exists that can be pursued. Players need to understand that if they win online, no legislation or guarantee is in place that the operator will pay at all.

CASA indicated that online gambling (apart from sports betting with a South African licensed operator) was totally illegal in South Africa, even if the website was hosted beyond the country’s borders. Transgressors are liable to face prison sentences of up to 10 years, fines up to R10 million or both such prison sentences and fines if convicted.

The association regularly calls for individuals and businesses to be aware of possible online gambling operations in their area and urges them to report any suspicious activities.

In an interview with the Saturday Star newspaper last September, CASA CEO Themba Ngobese told the publication that the National Gambling Board estimated that about 4 000 jobs were being lost because of the illegal gambling industry.

He told the paper that this industry was responsible for funding other criminal activity as the money made from these illegal establishments could not be kept in banks.

When the premises in Songozwi Street was visited, no such copy of the license could be seen.

When we spoke to some of the neighbouring businesses, they said that they had not been consulted or informed about the gambling business opening next to them. Some of them also complained about the excessive smoke emanating from the business. The gambling customers apparently smoke inside the building and the smoke filters through the roof, making life very uncomfortable for other tenants.

“Whilst an applicant for such licence is not obliged to directly inform the neighbours of an intention to  operate such business, the applicant is, however, required to strictly adhere to section 26 of the Limpopo Gambling Act, No. 3 of 2013, which compels the applicant to publish a notice in the Government Gazette and in a newspaper circulating in the area where the site to which the licence relates is situated. The notice must invite interested persons to lodge their written representations and objections in relation thereto,” Molepo said.

The LGB had no such application on record and no newspaper notice could be found concerning the premises in Songozwi Street.

The problem of smoking inside a building is not handled by the LGB, but by the local municipality, in terms of health and safety regulations. When Mr Louis Bobodi, spokesperson for the Makhado Municipality, was approached for comment, he referred the issue to the relevant department. A day after the inquiry Limpopo Mirror was contacted by the municipality’s health department, asking about the address of the business. The inspector promised to investigate.

During the reporter’s visit to the gambling outlet, two sections were found inside – one for smokers and one for non-smokers. The smell of cigarette smoke was, however, very evident inside the entire building.

Ms Molepo urged members of the public to report any such illegal establishments. They can contact the Law Enforcement Unit of the Limpopo Gambling Board, led by Dr P Masogo, on 015-230 2300.

When contacted about Cybernet, Dr Masogo insisted the matter was under investigation by the LGB and the Makhado police. “It is very bad to the economy of Makhado and to society in general because it is not licenced,” he said.

Asked as to how many cases of illegal gambling the board had investigated in the past six months and if they had closed down those outlets in the province, Dr Masogo only indicated that a journalist should visit the LGB for an interview. 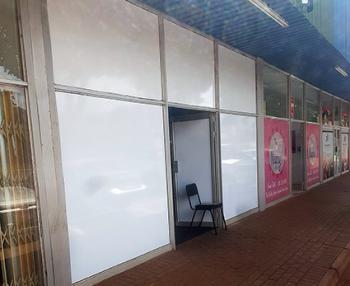 From the outside no sign boards or any other indication that a gambling outlet is being operated from this premises in Songozwi Street, Louis Trichardt, can be seen.