Back to the drawing board for Royal Family?

The Mphephu-Ramabulana royal family council will have to revisit the succession question and make another proposal as to who should be the new king or queen of the Vhavenda. This time, however, the royal family will have to take other factors in consideration, one being the legal requirement to promote gender equality.

On Friday, 12 April, the Supreme Court of Appeal (SCA) dealt the royal family a blow by ruling in favour of Masindi Clementine Mphephu, one of the contenders to the throne. Masindi’s legal team took an earlier decision by the Limpopo High Court on review. In December 2016, Judge President Ephraim Makgoba dismissed their application and indicated that Masindi should have explored other avenues if she was aggrieved by the decision to appoint Toni Mphephu Ramabulana as the new king. Judge Makgoba did not want to rule on the various technicalities, such as prescription periods, jurisdiction and the role of the ndumi.

The SCA did not agree and referred the case back to the Limpopo High Court's Thohoyandou division for further adjudication on the merits, but before another judge. The SCA also declared the decision of former President Jacob Zuma to appoint Toni Mphephu as king to be unlawful and invalid.

Background to the case

The court gears slowly started moving and in August 2015 the parties agreed to first deal with the “technical” matters, or points in limine. Masindi’s legal teams raised 14 issues which they wanted the High Court to make a ruling on first.

The issues raised were in most cases very technical, dealing with prescription periods and exactly who has jurisdiction during certain processes. It also required clarity as to what review processes are available as remedies.

The case was eventually heard in December 2016, but Judge Makgoba dismissed it. He also did not feel the case had a chance of success if it was appealed and refused permission. Masindi’s legal team proceeded to obtain permission to appeal directly to the SCA.

What did the SCA say?

The five Supreme Court judges agreed with the High Court on some of its findings but disagreed on most of the important issues raised.

As far as prescription is concerned, the SCA partly agreed with the High Court that Masindi should have lodged a claim when the two commissions had investigated the matter. The first commission, the Commission on Traditional Leadership Disputes and Claims, functioned from 2004 to 2009. When its term expired, a new commission was established, again with a lifespan of five years. Both commissions were tasked with investigating and making recommendations on matters relating to leadership disputes.

The first commission decided in 2010 that the kingship/queenship of the Vhavenda vested in the house of the Mphephu-Ramabulana royal family. This decision was announced by the then president in July 2010. In August 2010, the royal family identified Toni Mphephu-Ramabulana as the king of the Vhavenda and informed the new commission. This decision was communicated to the relevant minister and premier and eventually led to then-President Zuma making the announcement.

When the first commission investigated the matter, Masindi was still underaged, but she turned 18 in 2009 and was considered an adult when the commission announced its findings in January 2010. The SCA agreed with the High Court that no evidence existed that Masindi had ever contested or disputed the claim for incumbency by Toni Mphephu-Ramabulana before the first or second commission.

Masindi’s argument that she was not obliged to do so in terms of the Framework Act was not accepted by the SCA. “(She) had ample opportunity to produce evidence or make an allegation to the (president) in support of her claim,” the judgment reads.

The SCA agreed with the High Court’s finding that Masindi had not followed the processes provided for in the Act. “The High Court was also correct in dismissing her allegation that she held a legitimate expectation that the leadership incumbency was under investigation by both commissions,” said the SCA.

The courts do have the jurisdiction

The respondents in the SCA case argued that the High Court lacked the jurisdiction to hear a review as it concerned a matter that could only be considered properly by a specialist commission. The SCA judges partly agreed with this, stating that “the Commission, with its special knowledge of customary law, was designed mainly to deal with the distortions in traditional leadership, lineages and disputes as a result of interference by the apartheid regime.”

The SCA did not, however, agree that the court should be limited in its jurisdiction on whether or not a person has lodged a claim or declared a leadership dispute with the Commission. “The courts are vested with authority to adjudicate customary law issues in appropriate cases and to that end Section 211 of the Constitution obliges them to apply and give effect to customary law where it is implicated,” the judgment reads.

The SCA also made it clear that decisions taken by commissions and members of the Executive Council for Traditional Affairs and Traditional Councils can be reviewed. “Their decisions are of an administrative nature, made under empowering legislative provisions, which include the Framework Act and thus constitute administrative action, which is reviewable under PAJ (Promotion of Administrative Justice Act),” the SCA ruled.

Even though Masindi did not make use of the avenues provided to resolve disputes by the two commissions, the SCA judges are of the opinion that she was still entitled to approach a court to review the decisions taken.

It must be a man!

Probably the strongest argument raised by Masindi’s legal team as to why Toni Mphephu-Ramabulana’s appointment as king must be reversed by the courts concerns the issue of male primogeniture.

The SCA judges clearly did not agree with such a precedence that was declared, stating that it “established a criterion which upholds the principle of primogeniture that offends the right to equality in the Bill of Rights.” The SCA, however, did not want to declare the criterion as unconstitutional and invalid. A progressive form of development was rather suggested, in line with the Constitutional Court’s recommendation. This court suggested that “a community must be empowered to itself act so as to bring its customs in line with the norms and values of the Constitution.”

The SCA in its ruling reminds the Vhavenda traditional communities that they have an obligation to develop the criteria for identification of a king or queen to bring it in line with the Bill of Rights. The SCA also criticised the former president, the minister and the royal house for not having considered these factors before making a recommendation.

“The decisions to identify and recognise (Toni Mphephu-Ramabulana) should thus be reviewed and set aside,” the SCA ruled, effectively removing him, for now, as king of the Vhavenda.

It was not a family decision

One of the technical points raised by Masindi’s legal team was that the decision to decide on a new incumbent was not taken at a properly constituted meeting. The Framework Act specifies that such a decision must be taken by a structure consisting of immediate or close relatives of the ruling family.

During the August 2010 meeting, members of the royal council were also present. Not all of them were related to the Mphephu-Ramabulana royal family. The meeting was also attended by other senior traditional leaders who were not immediate family members.

“The decision of the meeting was thus not in accordance with the law and stands to be reviewed and set aside,” the SCA ruled.

The SCA discussed some of the other disputes raised by the parties but did not want to rule on these. “These disputes require application of principles of customary laws and custom, without which the adjudication of this case cannot reach finality,” the judgment reads.

Three issues were identified that need clarification. The first one is whether or not Masindi’s mother was the dzekiso wife of the late king Dimbanyika. The respondents in the case also argued that a customary requirement exists that an incumbent may not have been born before his or her father became king or queen.

The second issue concerns alleged intimidation. Masindi’s uncle, Mbulaheni Charles Mphephu (who is also a contender for the throne), stated that both he and Masindi had received threatening messages when trying to speak to the royal family and state their claims as successors.

The third issue that needs clarification is the position of the ndumi or regent. Toni Mphephu-Ramabulana was appointed as ndumi, following the death of Dimbanyika, and Masindi’s legal team argued that, according to customary law and custom of the Vhavenda, this would disqualify him from becoming king.

The Thohoyandou High Court must now listen to the various arguments again and make a ruling. This court, however, cannot ignore the guidelines set by the SCA. “Thus, any attempt to appoint anyone to the throne at this stage of the proceedings, would require a prior resolution of the very same issues pending adjudication in the High Court,” the SCA judgment reads.

The SCA also made what can only be described as an “interim” ruling. “…the review and setting aside of the respondent’s recognition as King of Vhavenda and the withdrawal of his recognition certificate will have to be stayed, pending the completion of the proceedings, including any appeal process that might arise therefrom,” the SCA ruled.

The wording of this paragraph has caused some confusion, as many believe that it voids the earlier ruling that Toni Mphephu-Ramabulana’s appointment as king of the Vhavenda was invalid and set aside. Masindi’s attorney, Johann Hammann, explained this week that this is a measure taken to ensure continuity and that no leadership vacuum occurs. “Toni will be acting as king until such time as the court processes are completed,” he said. 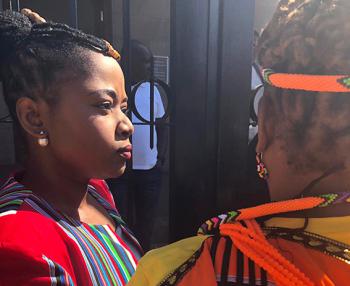