“Develop a hunger for success”

The executive producer and creator of the SABC2 soapie Muvhango, Dr Duma Ka Ndlovu, has urged the Univen media studies students to develop a hunger and thirst for success.

Despite criticism of job scarcity for students in the media field, Ndlovu shed light for the students on opportunities that are available to them in the media industry, especially in the television industry.

Speaking during a courtesy visit at Univen last Monday, Ndlovu said that the youth were focused more on becoming actors and actresses because they wanted fame. “In the television industry there are several career paths that media studies students can partake. There are career paths such as being a producer, script writer, translator, video editor, art director, content strategist, and audio-visual technician. The industry needs individuals who are ambitious, self-motivated and determined.”

He said that in his company he only hired people who had qualifications as he believed in bringing new faces and talent into the industry. “I encourage you to study hard until you graduate, because I no longer hire anyone without a degree,” he said.

He said that language representation was one of the things that had triggered him to start a Tshivenda soap opera. "The spoken languages in the Limpopo Province are minority languages and are not well represented on our television screens. The representation of languages is a deep and sensitive topic that also needs to be looked at with careful African eyes. South Africans need to use film and television to restore the dignity of those marginalized languages like Tshivenda and Xitsonga without distorting or modernising our indigenous languages," he said. 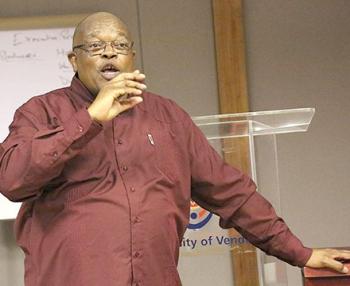