Hundreds of people gathered at Makonde-Tshilulu village, outside Thohoyandou, to pay their last respects to Vho-Tshianeo Elizabeth Munyai (60) on Saturday.

Commonly known as Vho-Elisa in local circles, Munyai was an informal entrepreneur who was a role model to many prospering businesspeople in the village. She used to sell products such as mopane worms, second-hand clothes, traditional home-made beer (mahafhe) and home-made mageu, among others. She passed away after falling ill.

Her son, Ndivhuwo Munyai, told mourners that he was privileged to have had a mother who had struggled uncompromisingly to raise her children.  “My mother was not formally employed, but she made sure that food was always on the table. As a single parent, she would do anything to make sure that her children were happy and the whole family was provided sufficiently. We are now responsible, grown-up individuals because of her sacrifices.”

He said although his mother was gone, the family was comforted by the support they received from family members, friends and the community of Makonde. “Her death was a terrible blow for the family, but we have confirmed that our mother was loved by many. She will remain in our minds forever, because she had played a very important role in our lives. If she started her informal business during the current time, I’m convinced that she would have been a millionaire now. It is just a pity that during her business days, there was little or no government support for the disadvantaged informal traders. Indeed, we are very proud to have had a strong mother like her.”

Ndivhuwo’s sentiments were echoed by his uncle, Edward Tshidumbu Munyai. “My sister passed on at a time when we needed her most. She was the pillar of strength in the family. Death has robbed us of a wise woman, who was always there to advise us on issues of our daily lives. Her selfless spirit of non-surrender will always guide us until we also depart from this world.” 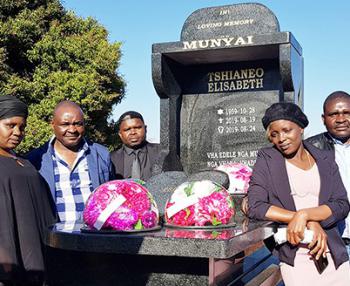