A former professional educator, Manenzhe-Gandamipfa feels that the Tshivhase Traditional Council had removed him from his “rightful throne of chieftainship” in the Vhutalu village, near Dzimauli, because of a “longstanding enmity” between him and Thovhele Vho-Mailausumbwa Tshivhase.

He told Limpopo Mirror that Tshivhase had first used the powers of his office to suspend him as a chief in 2001 and again reinstated him in 2011.

“I was suspended on the basis of false allegations, which included an attempted murder case that was brought against me. I was later exonerated, and of the false accusation that I had insulted the Tshivhase Traditional Council.”

However, Manenzhe-Gandamipfa was reinstated as chief on 18 July 2011 by Thovhele Vho Mailausumbwa Tshivhase. He said that, after the reinstatement, he asked Tshivhase many times to write a letter to the Department of Cooperative Governance and Traditional Affairs (Cogta) to reinstate him on the traditional leaders' payroll as a chief. “That was when I had just quit my job as a teacher, so that I could focus fully on my duties as a chief and leader for my people,” he said. “However, Tshivhase said I should give him 15 cattle and then he would arrange for me to be put on the Cogta payroll. That was totally absurd, and I told Tshivhase in his face that I was not going to give him any cattle because that would seem like I was buying a 'throne of a chief' from him. I am royalty by birth right and a rightful heir to the throne of the Gandamipfa-Manenzhe Royal Family.”

According to Manenzhe-Gandamipfa, Tshivhase then directed both the Gandamipfa-Manenzhe Royal Family and the Tshivhase Traditional Council to stop regarding him as a traditional leader over Vhutalu village.

“I received the shock of my life when I got the news that my younger brother, Alushavhiwi [Ernest Manenzhe] was being installed as a chief in my place on 27 July 2019,” he said. “The Tshivhase Traditional Council then moved the date of installation to 26 July in the evening, for fear that I might slap them with a court interdict before they could install my brother.”

Meanwhile, the newly installed Chief Alushavhiwi Ernest Manenzhe said that the Gandamipfa Manenzhe Royal Family had summoned Manenzhe-Gandamipfa to appear before it and to account for some misdemeanours he was committing on 30 December 2018.

“Moses appeared but only to throw insults at very senior members of the family like khadzis and vhavenda,” Manenzhe said. “It was in that meeting that a decision was taken by the whole family to remove him. On 11 January 2019, in a duly constituted meeting of the Royal Family, a successor was properly identified in line with customary law. It is this successor who was later introduced to Vho Mailausumbwa.”

Manenzhe stated that, while the installation took place on 26 July, the celebration was conducted the following day.

“There's no law that says the installation and celebration must be done on the same day,” he said. “The installation could have been on any other day. There was nothing to fear since the royal family was united on this and if there was to be a court, it (the complaints) would only have come from the disgruntled members of the family. Moses was standing alone like a sore thumb on this matter with no support whatsoever as he was wrong on how he was handling this.”

Manenzhe concluded: “Moses needs to be reminded that he is not the only one with legitimate right to the title. Any member of the royal family who is properly identified may legitimately be appointed. The decision lies with the royal family, and whosoever has the courage to verbally abuse royal family members does that at his own peril.”

Thovhele Vho Mailausumbwa Tshivhase indicated that Manenzhe-Gandamipfa had failed to respect his own royal family and the subjects in his village. “He insults the very people whom he was supposed to lead,” Tshivhase said. “At one stage we summoned him to the Tshivhase Traditional Council meeting after he had caused some serious problems in the village, but he rose up and started swearing at the council. We had no choice but to speak with the Gandamipfa-Manenzhe royal family to select another suitable candidate to ascend to the throne and be their chief, instead of some lad who lacks respect. He should just be happy that after all his bad conduct we still agreed to install his blood brother and not someone from outside.” 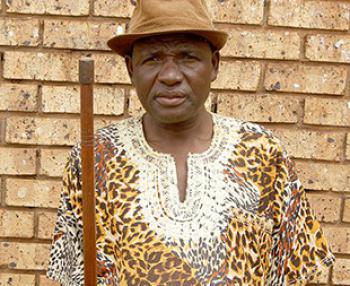 Mr Shumani Moses Manenzhe-Gandamipfa is crying foul after the Tshivhase Traditional Council had replaced him with his blood brother.