Soutpansberg resident Peter John Taylor has established himself not only as a respected academic, but now also as a published author with the release of his children’s book entitled Elijah and the Messengers of Death.

Taylor obtained his PhD degree in zoology from the University of Natal and is currently appointed at the South African Research Chair on biodiversity value and change at the University of Venda (Univen). He also co-founded and developed a public bat interest group based in Durban (Bats KZN) that predominately focuses on public education and the rehabilitation of bats. He has authored four scientific books and more than 160 scientific articles.

His love of bats forms the focus of Elijah and the Messengers of Death, as perfectly described in a recent book review compiled by Anna Diegel. She writes:

Indeed, something new always comes out of Africa. Peter John Taylor’s Elijah and the Messengers of Death, a novel that addresses young teenagers, reaches far beyond the junior market. At first sight, the book is a classical adventure drama involving three kids who feel “misunderstood” and delight in their newfound solidarity.  The scene is rural Eastern Highlands of Zimbabwe at the turn of the 21st century. Elijah, a clever schoolboy with quixotic ideals of adventure, makes friends with Jane, a bookish, black-clad oddball of a girl who becomes his kind of Hermione Granger. The children are joined by Thambu, a youngster from the neighbouring Shona village, who is highly skilled at practical tasks, but shy about his school abilities. Included in their club is a furry friend who is not a dog, but a mongoose. Together, the trio and their pet embark on a peculiar quest: to save a colony of bats whose existence is threatened by a variety of enemies.

In Africa, bats, like the children in this book, are nature’s “misfits”. White people consider them to be dirty creatures with a disgusting habit of clinging to people’s hair. For the Shona, including the elders in Thambu’s community, these animals are “messengers of death” who incarnate evil spirits. Here the bats live in a cave where they are the guardians of the tribe’s ancestors and they will curse and take revenge on those who cross their path. Bats are blamed for the death of Thambu’s uncle and for the illness of his aunt, who in fact both suffer from tuberculosis. It becomes the children’s mission to dispel superstitions and prove that bats are useful creatures that should be protected.  They seek the help of an elderly professor, a mammalogist and bat specialist, who gives them the knowledge and the scientific tools they need. Then the children and their mongoose friend launch into a hair-raising expedition to save the bat colony. They experience dangers, from near drowning and crawling into the darkness of a damp cave to the wrath of the enemies who try to thwart their project and use physical violence. These enemies are not always the ones they think. From mystery to mystery, clinging together, keeping secrets from their unsupportive parents or fighting jealous and bullying schoolmates, the three eventually win their battle and become admired nature conservationists.

If Elijah and the Messengers of Death is a riveting story for youngsters, it is also of pedagogical value for parents or teachers. Through the experiences of the three memorably characterised youngsters emerge several life lessons, such as the importance of not judging too hastily and of perseverance to see efforts rewarded. The book is also an attractive and detailed approach to natural science. But above all, Elijah and the Messengers of Death conveys the magic of rural African living: sights, smells, sounds, village customs and natural space are vividly evoked in this tale about the necessity of conservation. We can hope that these young heroes, these Famous Four with their mongoose, will keep growing and captivating the world with their adventures in Southern Africa.

Elijah and the Messengers of Death can be ordered from info@dancingpencils.co.za. 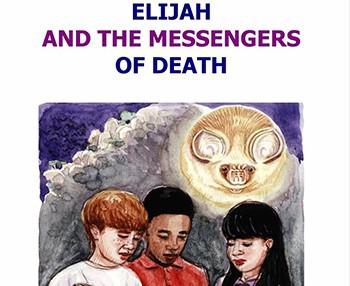 Peter John Taylor’s newly released children’s book, Elijah and the Messengers of Death. Taylor is currently appointed at the South African Research Chair on biodiversity value and change at the University of Venda (Univen). Image supplied.