Red Kite Environmental Solution announced on Monday, 11 November, that the Department of Mineral Resources has granted them environmental authorisation for a prospecting right in the Bandelierkop area.

The applicant for the proposed prospecting right is a company listed as K2018010819 (SOUTH AFRICA) (Pty) Ltd., with the department granting authorisation on 30 October.

The extent of the area proposed to be prospected equates to 9 951.20 ha and the minerals to be prospected for will be chromite, nickel, copper and cobalt. “Following prospecting, the drilled holes and disturbed areas will be rehabilitated,” stated Red Kite in their presentation. The proposed project entails three diamond drill holes up to a maximum depth of approximately 400m, as well as the establishment of three site camps (432m³ total), including an equipment storage area (100m³ total), drill sites (75m³ total), and ablution facilities (portable toilets) (6m³ total). Clearance of vegetation (432m³ total) will also be required for the establishment of the drill sites, site camp and ablution facilities.

In their announcement on Monday, Red Kite said that any registered interested or affected party (including any organ of the State with interest in the matter) wishing to appeal the decision must submit their appeal to the Minister of Environmental Affairs (appealsdirectorate@environment.gov.za or by post to the Directorate Appeals and Legal Review, Private Bag X447, Pretoria, 0001) and send a copy of the appeal to the Limpopo regional office of the Department of Mineral Resources (tebogo.mangaba@dmr.gov.za or by post to the Regional Manager: Limpopo Region, Private Bag X 9467, Polokwane, 0700) within 20 days of 11 November. The environmental authorisation number is LP30/5/1/1/3/2/1 (13298) EM and the project name is Bandelierkop Prospecting Right Project.

Red Kite held their first meeting with landowners regarding the proposed prospecting-right application on 24 April this year. From the onset, however, the meeting was characterised by confusion. Landowners did not know whether they were attending an information session or an actual public-participation meeting as required by law. Numerous important documents were not made available to all the affected landowners, which included a full copy of the basic assessment report (BAR).

This meeting was eventually concluded with a commitment by Red Kite to ask for an extension of time from the Department of Minerals and Resources (DMR) for interested and affected parties to submit comments and objections, and to distribute the legally required documents. In response, the DMR granted an additional 50 days to finalise the BAR and relevant supporting documentation, including the Public Participation Report. As such, a second 30-day commenting period was provided for from 15 May to 13 June.

With the additional commenting period closed, Red Kite scheduled a “second additional Public Participation Meeting” on Tuesday, 18 June. Especially AFB Makhado was well represented at the meeting. Their biggest concern was the availability of water. The issue of water shortages in the area was also raised by several private landowners. In response, Red Kite stated that the application was for a prospecting right only. They said that any possible future mining permits or mining rights would be subject to specialist studies and a public-participation process of their own, and that such a process would include further consultation.

The Red Kite notice was issued by Chantel Muller. She can be contacted at Tel 084 444 2414 for more information. 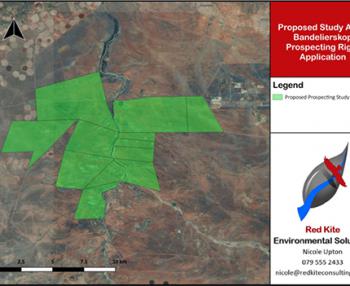