No school for Masisi learners on Monday

Several learners from around Masisi village in the northern part of the Vhembe District could not attend school on Monday because of the heavy rainfall in the area.

Most affected learners were from Shetani Secondary school. According to a South African weather service report, areas near the village received 46mm and 69mm of rainfall respectively on Sunday morning. On Monday, Thohoyandou received 117mm.

DA councillor Joseph Mariba, who lives near Masisi village, said 47 homesteads had been flooded by Monday.

“We could not let our children walk in the rain nor let them try and cross the low-lying Mutale river bridge to the school,” said Reckson Mukhoto, one of the community leaders. According to Mukhoto, representatives of the Vhembe District Municipality (VDM) visited Masisi village on Monday. “We just noticed Vhembe Municipality’s vehicles on Monday, but they did not do anything,” said Mukhoto.

Matodzi Ralushai, spokesperson for the VDM, said the municipality was aware of the situation.

“We encourage those affected to report to their ward councillors,” he said. Ralushai said that the work that needed to be done would depend on which areas were affected. “If there are (damaged) roads, then local Department of Public Works will come in, or if it is water and sanitation, the Vhembe Municipality will deal with the issue,” said Ralushai. 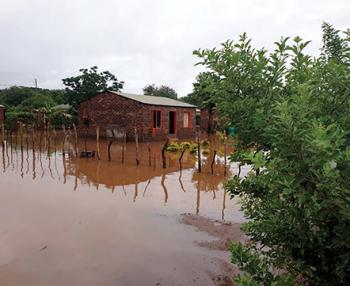 One of the houses in Masisi village that were affected by the heavy rainfall in the area. Photo supplied.