Epilepsy is not associated with witchcraft

The GladAfrica Foundation and the University of Venda (Univen) launched a four-year partnership to research epilepsy to assess the prevalence of epilepsy in rural communities of Limpopo and Mpumalanga and to develop response mechanisms.

Epilepsy is one of the health conditions that remain highly stigmatised within the communities. According to Epilepsy SA, epilepsy affects 1 out of 100 people and about 66% of the underlying causes of epilepsy are unknown (idiopathic epilepsy). Epilepsy is often surrounded by prejudice and myth, which can be overcome only with enormous difficulties.

Prof Rachel Lebese, Univen's research professor, said epilepsy was a chronic disorder of the brain, characterised by recurring seizures, which are brief episodes of involuntary movement of the body and sometimes accompanied by loss of consciousness. "The disorder spans all age groups and to onlookers it can instil fear, prejudice and discrimination."

She said people who suffered from epilepsy were often ostracized by their families and communities because of a lack of understanding of this health condition. "A need exists to destigmatise epilepsy and raise awareness on its causes and medication options applicable to different types of epilepsy."

The co-chairperson of the GladAfrica Foundation, Mr Noel Mashaba, was affected by epilepsy during his childhood. "Epilepsy needs to be explained in the medical sense in order to dispel myths and misconceptions that exist in our communities. In most instances, epilepsy is regarded as a disability instead of a health condition. We need to destigmatise epilepsy and raise awareness on its causes and medication options applicable to different types of epilepsy," said Mashaba.

To improve the quality of life of people with epilepsy worldwide, he said, considerable efforts were needed to educate all sectors of society and the general public, as well as the families of people living with epilepsy. "People with epilepsy are sometimes regarded as 'being chosen' or 'being possessed', depending on the prevailing popular belief. This can delay treatment and worsen society's attitudes towards epileptic people. Despite the significant clinical and therapeutic progress of the last century, people with epilepsy continue to be stigmatised."

Prof Jan Crafford, Univen's deputy vice-chancellor academic, said the university was proud that the School of Health Sciences had managed to attract funding from the GladAfrica Foundation. "This is an important project for us to be involved in. We want to be known for being engaged in research, be relevant to the communities we serve, and to engage communities through research." 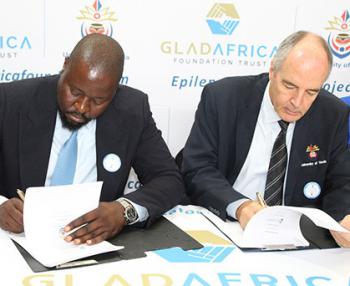