Man beaten to death, another fighting for his life in hospital

In yet another incident of mob violence, a suspect was beaten to death, while another one is fighting for his life in a hospital, after an incident at Mawoni in the Nzhelele area.

According to a community member, who did not want to have his name mentioned, the suspect was part of a group of gangs terrorising the community. They allegedly broke into houses, stealing household goods and raping women.

“We are tired of the anarchy caused by the thugs. They have been terrorising us for a long time and each time they have committed a crime, they simply return to the community,” he said.

During Tuesday’s incident, three of the gang had allegedly raped two young women and robbed them of cellphones and cash. On Tuesday, residents chased after the three suspects and apprehended two of the men, estimated to be in their thirties. The mob then beat the two suspects, with one dying during the ordeal. The other man was rescued by the police and admitted to a hospital, while the third suspect had run away.

This is the second incident in less than a month where mob justice has prevailed and a suspect was beaten and stoned to death in the Nzhelele area. Three weeks ago, a man was given the same treatment by the community at Mandiwana as they thought he was behind incidents of robbery in the area.

Residents claimed that the community had taken the law into their own hands because the police were not doing their job. “Our community is sick and tired of the police arresting criminals and then, within weeks, they are released,'' said a resident.

Khosikhulu Vho-Toni Mphephu Ramabulana condemned the brutal killing of the man. He urged everyone to be united in the fight against crime. "All we want is a crime-free village where one can sleep outside with open gates, without fear of being attacked by thugs. We are now urging all residents to notify their neighbours if they are away from home."

The spokesperson for the SAPS in Limpopo, Lt-Col Moatshe Ngoepe, said that he was concerned about the fact that the community had taken the law into their own hands. He said that the deceased had been beaten with different objects and had died on the scene and another one was fighting for his life. He will face charges after he is released from hospital. 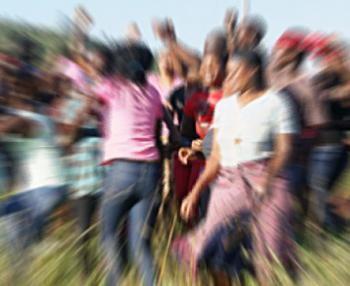