Musundwa and her children need a house

Life has always been tough for a Maelula Tshidaulu woman, the mother of five children. The family have been the most tragic victims of poverty and need a decent house to stay in.

The sickly and unemployed Ms Munyadziwa Musundwa and her family do not have proper shelter and they sleep on the cold floor during the winter. Musundwa stays in a shack that was damaged and can collapse any time. She gets child support grants for four children. “I am living in this shack with my children because I have nowhere to go," she said.

She said that sometimes they went to bed on empty stomachs because they had nothing to eat. Musundwa said that she could not raise enough funds to feed the family. She said the little money she received from the child support grants was used to buy food or to fix her house. When the rain comes down, water pours through the roof of the shack.

Musundwa addressed her plea to any person or businesspeople who might be prepared to assist her and family. "What we need is a house to stay and other kinds of donations as we are suffering for a long time in silence. We are trying hard to make ends meet, but our efforts seem fruitless and unrewarding. I want to raise my kids to be educated and have a bright future", she said.

Ms Thelma Ramabulana from Maelula said the royal council was aware of the hardship of Musundwa and her family. The royal council had been working tirelessly to fight poverty in the village, she said. “We are in the process of identifying all the poor families who have the same problem as Musundwa and her family. After completing the list, we will send it to the relevant authorities, and she will be among the people who need urgent help.” 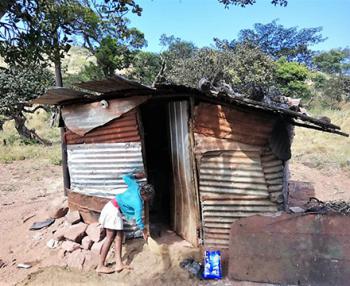