A month from now, on 29 October, World Stroke Day will be celebrated - a day meant to create awareness for people suffering from the effects of a stroke. The day is also meant to make people aware of the dangers of a stroke and what symptoms to watch out for.

Limpopo Mirror spoke to a local lady who suffered a stroke a few years ago to find out how she is coping and to learn what support mechanisms are in place to assist people.

Tendani Doris Ravhandalala grew up in Dopeni village, where she was cared for by her uncle and aunt. She attended Mutuwafethu Primary School, Balalila Primary School and Nngweni Secondary School. At the age of 18, she fell pregnant and gave birth to a healthy girl.

“Then I had to come home, so that my mom could look after my daughter while I was going back to school,” she said. “I passed my Grade 12 at Mushaathoni Secondary School. I then went to Makhado Multi-purpose to study computer science. After that, I had job stints in different fields.”

She managed to get a job in Johannesburg and had to relocate. Before long, she was promoted to a post of data capturer. In short, she had managed to put her life into place, she was earning enough, and she was able to send something back home for her daughter.

This lasted until one night, on 29 November 2011, when she woke up and could not move the right side of her body. “I didn't know what was happening to me; what was going on with my arm and leg,” she said. “I lost my voice and I couldn't speak properly. I slept on the floor until the morning,” she recalled.

For Tendani, the experience came out of the blue, as she had not experienced any signs warning her of what was about to happen. “I was happy because I got a promotion. That was the job I always dreamed of. But then life changed…”

Tendani was admitted at the Tembisa Hospital in the morning, from where she was transferred to Baragwanath Hospital.

“I cried a lot; I was heartbroken,” she said. “After a month I was discharged and came back home, but the stroke had left me disabled. I went to Siloam Hospital, and that was where I met my physio friends. At first it was hard going to physio, but as time went by, I started enjoying it. My physio friends are the ones who encouraged me to go to school again.”

Tendani decided to enrol for a three-year office administration programme at Mavhoi College, where she graduated in 2019. “After that, I had not had another episode of stroke,” she said.

At the time, Tendani was also introduced to the Letlhogonolo Modise Foundation, a non-profit organisation that had been set up to assist young stroke survivors in navigating their way through life and attaining their independence. “The foundation has been assisting me with legal issues and online applications for studying at varsity,” she said.

“Tendani wanted to apply for a qualification at UNISA, but couldn't recall her student number,” said Letlhogonolo. “We stepped in and helped her, by sending her a link that another young stroke survivor in Mpumalanga had also asked to use for the same reason, and they both successfully got their student numbers.”

Letlhogonolo added: “Tendani and I developed a friendship over social media as we are both young stroke survivors, and that relationship had so far stood the test of time. I have come to see in Tendani a strong-willed woman. She is easy to talk to, friendly, kind, and loving. She has always been a determined woman in all that she does, and I respect her for that kind of strength.”

Tendani is a proud mother of two, a son and daughter. 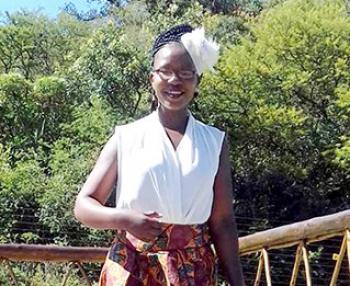