When asked what their most treasured possessions are, many people would point to a vehicle, furniture or perhaps jewellery. For the 82-year-old Mr Kanakana Jutas Mathoho, the object that he values most is a 60-year-old mbila, also called a thumb piano.

Mathoho explained that he bought his mbila for R2 in 1960, when he was 22 years old. Growing up in Tshiombo village outside Thohoyandou, he learned to love music from a young age. He was fascinated by the sounds of the mbila. Initially he tried to make his own instrument, but the sound was not good.

“I then heard of the late Mr Tshidumbumukwe Ramabulana of Mianzwi, who was a very good mbila maker. When I approached him, he said he charged R2 for the perfect mbila,” said Mathoho. Back in 1960, R2 was a lot of money. “I did not have the R2, but my late father, Mr Frans Mphephu Mathoho, gave me the money. I joyfully walked to Mianzwi the same day to buy this mbila that I’m still using today.”

Mathoho’s son and well-known pastor Dr Cedrick Nnzekiseni Mathoho said his father’s mbila was there when he was born 55 years ago. “The mbila is very old and he handles it with great care and affection. It was bought before I was born, but still looks new. In fact, his mbila is older than a lot of people here in our village of Tshiombo. I am very proud to have a father like him. He is a great record keeper and historian who keeps every piece of history safely.”

Famously known as JK Mathoho on the indigenous music scene, the old man shot to stardom in 1977 when he recorded his song, Thavha ya Luvhola, with the then Radio Venda in Louis Trichardt. This was during the 1977 heavy rains where the mountain of Luvhola fell and killed many people.  In 1983, the then Radio Venda recognized him with the Nambi ya Dzinambi Gold Award.

“My songs are based on true reflections of life and personal experiences. All the songs that I have composed and recorded are based on real life experiences. I thank God because He spared my life to see the Luvhola disaster in 1977 and another coronavirus disaster this year. That is why it was also important for me to compose and record a coronavirus song which was released in March this year. Over these years, I have been using this mbila that I’m still using today.”

Mathoho is concerned about young people’s reluctance to learn how to play indigenous musical instruments. “I play and keep various indigenous music instruments such as the Dende, Tshihwana and Tshitiringo and I am prepared to teach these instruments to the young people. I will be happy if some of them turn up, so that they can keep this history when we are no longer around in this world,” he said. 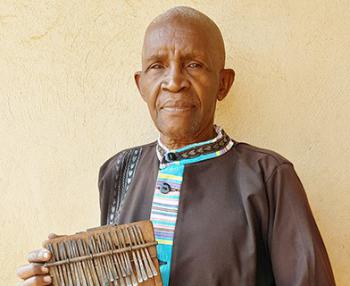