When the 24-year-old Shudufhadzo Musida was crowned as the most beautiful girl in South Africa on Saturday, the Vhembe region could not be prouder. The girl from Vhangani village next to Ha-Masia leaped into the hearts of millions of people, not only because of her stunning beauty, but also because of the warmth of her personality.

“It took an entire village to get me here, and I would like to thank all of you for being my village. I stand here today as your Miss South Africa with immense pride and joy to be representing such a beautiful nation – one of the first Venda women, but certainly not the last - to become Miss South Africa,” she said in her acceptance speech.

Shudufhadzo’s mother, Thandi, is a real-estate agent and she has a 13-year-old sister, Zwonka. Her mother was lucky enough to be able to be present in Cape Town when Shudufhadzo was crowned.

While the new queen was making her speech, the jubilation had already started at her home village. A group of people, mostly women from the area and young people, gathered at the Musida home. When the news broke, the singing and dancing started.

One of the people who closely followed the ceremony was Shudufhadzo’s grandfather, Mr Nnditsheni Musida. When she was announced the winner, he found it difficult to hold back his tears. “As a family we are exceptionally proud of having raised a young girl of Shudufhadzo’s calibre. She is fearless and ambitious, hardworking, determined and destined for success against all odds,” he said. To him, Shudufhadzo’s strong traits are her humbleness and down-to-earth character.

Ms Thivhani Fhedzisani, a close friend of Shudufhadzo, remembers the little girl that helped push a wheelbarrow to fetch water when she was growing up. She describes her friend as a very humble and beautiful person who liked to laugh a lot but was also very calm. Fhedzisani reckons Shudufhadzo will be the perfect Miss SA and she will serve as a role model for young people living in rural areas.

Someone who supported her campaign to be Miss South Africa is Chief Livhuwani Matsila of the Radzambo Cultural Foundation. He said that her hard work had already inspired many young people from the villages. “Shudufhadzo Musida’s victory is a thrilling experience for us. We are very proud that a Venda girl, one of our own products of the village, has made it to be Miss South Africa,” he said.

The senior traditional leader, Thovhele Vho-Nthumeni Masia, said the young beauty had put the village on the world map. “Our children have now started to dream big because of her,” Masia said.

Musida received the nod from the panel of judges not only because of her beauty. She very obviously has a sharp intellect and a passion to effect real change in the world. She has a Bachelor of Social Sciences degree in philosophy, politics, and economics that she obtained from the University of Pretoria. “I am currently pursuing a BA Honours in international relations at the University of Witwatersrand,” she told the judges. She currently stays in Randburg while studying.

Shudufhadzo believes that beauty pageants still play an important role in society. “[Pageants] also evolve with the times, so it’s no longer just a showcase of a woman’s beauty but the beauty of her mind too and how she can be of service to others beyond herself.”

Her message to young girls and young women in South Africa is very simple:

“Love yourselves first, fight for what you want and for yourself too. But remember, fighting doesn’t always have to be loud or vocal – it can be as simple as being silent and choosing to prioritise your peace.”

Shudufhadzo received much more than just a glittering crown and a sash on Saturday night. She will receive R1 million in cash as well as a further R2 million worth of sponsorships and prizes, including the use of a luxury Sandton apartment and a Mercedes-Benz cabriolet for a year.

The first runner-up in the competition was medical doctor Thato Mosehle (25) from Klerksdorp in the North West. Second runner-up was Natasha Joubert (23), a B Com graduate from Pretoria.

For the first time in the history of the Miss South Africa pageant, the trio will represent the country at the world’s three most prestigious pageants. Previously, the Miss South Africa Organisation sent a representative to both Miss Universe and Miss World but will also now be fielding a candidate to Miss Supranational. Which contestant will go to which pageant will only be revealed at a later date.

“This journey has been one of the highlights of my life - one that I will never forget and will cherish for as long as I live. Before this competition started, I had dreamed of helping women and children, and this platform has made that a reality even before the crown was placed on my head. This platform has not only empowered me, but it has caused a ripple effect that has empowered others too. It has empowered a nation of girls just like me and shows that all dreams are valid, irrespective of your background. My life has been changed forever and the lives of the generations that come after me, so for that – Ndo livhuwa,” said Shudufhadzo. 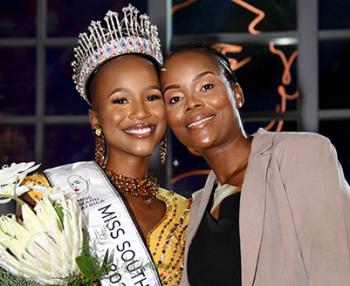