Sexwale's investment claims echo those of the “VBS buyers”

The past week’s news conversations were dominated by a few topics, but one that kept on coming to the fore was internet scams. When former Gauteng premier Tokyo Sexwale accused the SA Reserve Bank of holding on to hundreds of millions of dollars meant for development, he was told that he was the victim of a scam. Sexwale’s claims, however, are very similar to those of a group who wanted to buy the embattled VBS Mutual Bank two years ago.

In April 2019, Limpopo Mirror reported on a company called Africapacity’s plans to buy the about-to-be-liquidated VBS Mutual Bank. The company, which claimed to represent the minority shareholders of the bank, wanted to negotiate a deal with the liquidator, but no-one seemed to believe that the company had the money for such a transaction.

Africapacity’s chief investment officer, Enock Ratlabala, was adamant that enough funds were available to buy VBS and to also spur developments of hundreds of millions in the country. This company seemed to be the elected agent of an overseas benefactor who had already transferred billions of rands, earmarked for such development. The only problem was that the money was not available, because the SA Reserve Bank was holding on to it.

During a press conference early in 2019, Africapacity handed out documents in which it claimed that the SA Reserve Bank was holding on to $825 million (R12,3 billion) in investment funding. The money was allegedly paid over in tranches to different accounts, the first being the $75 million into an FNB account. Thereafter, another $75 million was paid into a VBS account. This was followed by another tranche of $75 million, a $400 million payment into an FNB Global Dollar account and finally, a $200 million payment into a Standard Bank account.

In a letter dated 30 August 2018 addressed to the Governor of the SA Reserve Bank, Ratlabala complains about the withholding of the funds. He explains that Africapacity “is the sole beneficiary of all transfers made so far and proof of such transfers will be given to you in the meeting tor cyber security reasons”.

Ratlabala told the SARB that Africapacity “has gone out to China and America seeking investments for infrastructure projects funding for South Africa, and have secured more than $USD 50 billion for such infrastructure development(s).” He then discloses that an agreement had been reached with Chinese partners and banks, together with Manna World Holdings Sovereign Trust in the United States of America.

Much like what Tokyo Sexwale is currently doing, Ratlabala accused the SARB of thwarting development and denying the citizens opportunities. “The delay in release of the money has already Impacted on housing, electricity and water projects,” he writes and then mentions various local municipalities that should have benefitted. He also argues that the money could have averted many of the service delivery protests that, at the time, were crippling the country.

“It is expected that more than 2 000 000 (Two million) jobs will be created over the term of the development,” Ratlabala said and linked it to the presidential job-creation project for the unemployed youth. “It looks like the prospect of creating jobs for youth and providing basic services for our poor communities is delayed by [the] South African Reserve Bank,” he said.

The “lucky” chosen ones

Why such a small and relatively unknown company would be chosen to be the intermediary and handle investments of hundreds of millions (if not billions) of dollars was not clear. After being dormant for some years, Africapacity was resurrected in 2017 and in 2019 had two active directors, Nomzamo Xabanisa (31) and Nombini Xabanisa (42). The company did not seem to have any track record in developments, even though its CIO claimed that it served as a subsidiary company that was involved in project funding and development of infrastructure projects that ranged from integrated housing development to shopping centres, office parks and public facilities.

In a letter addressed to the Reserve Bank Governor in August 2018, Ratlabala states that his company has “gone out to China and America” seeking investments and has secured more than $50 billion for infrastructure development.

Exact details of the anonymous funders were not disclosed to the media, but the letters written to the SARB indicate that the “deposits” were facilitated by a group calling themselves Manna World Holdings Sovereign Trust.

Ratlabala was confronted with the question of whether he thought that the company might have become the victim of an elaborate international scam.

“We have come across the same questions before from different stakeholders. We have done our own due diligence, on our financial partners. The local banking institutions that we are involved with have also done a due diligence on our guarantees and they are satisfied. If South African Banks don't have a problem, why should we be worried?” he said.

“The funds were also confirmed by the recent Chinese delegation’s visit to South Africa and also the South African visit to China. Several South Africans … have tried to confirm the funds, others tried to blackmail us to get access to the funds and they have failed over the last three years,” he said.

If there is a reputation, it is not a good one

Had proper, due diligence been done on the “funders”, Africapacity might have found that the partners are very dubious. Manna World Holdings Sovereign Trust (MWHST) is apparently some sort of cult movement, believing in a new world order where money does not fall under the control of governments. The “leaders” are apparently a certain Kimberly Ann Goguen, Terrance Cameron McDonald, a self-professed priest, and Lewis E Taylor, a self-professed philanthropist.

Interestingly enough, the name of “Manna” also pops up in a warning issued by the Bank for International Settlements (BIS). This bank also featured in part of the Sexwale claims and is used as “proof” that the transactions are legitimate. In a section titled “fraudulent schemes”, the BIS says:

“The name and marks of the Bank for International Settlements (BIS) are increasingly being used in attempts to defraud the public, for example through bogus financial transactions, fake lotteries, fake social media ads and other scams. In some scams, the BIS is mentioned as the bank through which payments will be made or assets are guaranteed…

“The BIS would like to remind the public that it is an international organisation providing banking services exclusively to central banks and other official sector customers. The BIS does not accept deposits from, or offer financial services to, private individuals or corporate entities…”

The reminder of BIS that the institution does not deal with individuals or organisations echoes that of the SARB stating that individuals or private companies cannot open bank accounts at the country’s reserve bank.

The BIS also mentions Manna Projects by name, but whether the reference is to the same Manna World Holdings that interacted with Africapacity remains uncertain.

“…the BIS has received reports of scams initiated by letters from an institution called ‘Manna Projects Consultant Sdn Bhd’ in respect of a ‘Socio-Economic Development Initiative Programme (SEDI Program)’. Please be aware that the BIS is not in any way associated with Manna Projects Consultant Sdn Bhd and the BIS is not familiar with, and has not approved or supported, the ‘SEDI Program’ referred to in those letters.” 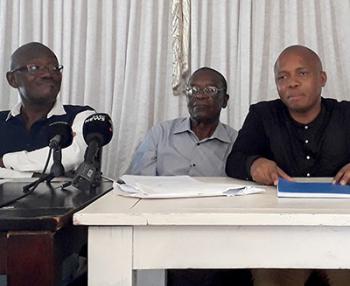