The infighting among members of the Mamphodo Mushasha Begwa Community Property Association (CPA) has effectively destroyed a once productive farm and stopped further development. The animosity has reached such a degree that the current management tried to obtain a court interdict at the end of 2020 to stop a group, calling themselves the “Concerned Group”, from interfering with activities on the farms. Accusations of the abuse of funds and personal enrichment have also been made.

Around 2006, the land claim on the farm Melkhoutkopjes 314 was settled. The land claim was gazetted in May 2004 and included an area of almost 4 000 hectares southeast of Louis Trichardt, adjacent to the Ben Lavin Nature Reserve, mostly east of the N1.

When the land claim was filed, the biggest part of Melkhoutkopjes (1 500 ha) belonged to the Menné family. This family had moved into the area in 1875. The farm Melkhoutkopjes was officially proclaimed in 1886, and in 1890 the adjacent Boskopjes was proclaimed.

The late Mr Peter Menné was in favour of the land claim being awarded to the Begwa community, but he asked that Melkhoutkopjes and Boskopjes be combined. A large part of the farm (1100 ha) belonged to the estate of the late Mr Martin Armitage.

When the land was handed back in 2006, the CPA had roughly 100 verified members. The first chairperson of the CPA was Edward Mamphodo. In 2010, when the executive committee’s term ended, elections were held, and they were re-elected.

In 2013, a new executive committee was elected, and things started moving in a new direction. Tshinane Eric Mukwevho became the CPA’s chairperson. In court papers filed to support the application for an interdict, Mukwevho explains that elections were again held in 2018, and the same committee members were re-elected, presumably for another five-year term.

In the affidavit filed by Mukwevho, he boasts about the achievements of the current CPA executive. The number of beneficiaries has grown to more than 500. The committee also formed a private company, Eliomart Pty Ltd, to seek funding and further develop the farm. In 2016, the Department of Rural Development and Land Reform allocated R6,7 million for the Eliomart farming project.

Eliomart Pty Ltd was registered as a private company in March 2015. Later that year, five directors were added to the company, namely Mulunde Walter Maseko, Lucky Mashasha, Ntshengedzeni Gift Mukwevho, Tshinane Eric Mukwevho and Derick Mushasha. All of them indicate their home addresses as in Gauteng.

“The farming activities have now become more effective and efficient with advanced farming equipment which has now seen production levels escalating with farm produce being sold for a profitable cause and for the ultimate lawful distribution for the benefit of all verified beneficiaries,” says Mukwevho in his affidavit.

Mukwevho adds that the farm employs 32 people, but then states that more beneficiaries were offered employment opportunities, which they initially accepted, but “thereafter refuse to work claiming that they wanted office work and not farm labour”.

In the affidavit, Mukwevho talks about the animosity that has arisen between the former executive committee members and the new committee. He alleges that the opposition group damaged infrastructure on the farms and threatened to further disrupt activities. He alleges that in November 2020, the group of dissenters looted almost three quarters of the harvest. Charges were laid with the Makhado police, but no arrests were made.

Mukwevho argues in his affidavit that several attempts to try and resolve the issue via dialogue were unsuccessful and that is why they had to approach the court for relief. The court proceedings are still continuing.

On Saturday, 17 April, more than 50 members of the “Concerned Group” gathered at the farm to discuss the burning issues regarding the CPA.

Some of the beneficiaries were transported by bus from areas such as Madombidzha. Others came from Masia, but the turnout was not as was hoped for. “The chairperson of the old committee confused the beneficiaries. He informed them that the meeting was cancelled, but we still called them together to come for this important meeting,” said Mr Solomon Ramurembiwa, the interim chairperson for the Concerned Group.

Ramurembiwa accused the current CPA committee of misusing funds. He referred to the R6,7 million received and said that the money was used to buy farming equipment such as a tractor, a truck and a bakkie that was meant for the CPA’s use. “These vehicles were not registered in the CPA’s name, but in an individual’s name. We want to know where all the farming implements and machinery that were bought for use on the land have gone. Furthermore, the land was divided into wrong portions,” said Solomon.

William Ramurembiwa (88), who claims to be the oldest beneficiary of the CPA, said: “This is our land. My father was born and buried on this farm. I too was born on this farm, so I am happy to see people start projects on this land.”

The current committee refused to respond, saying that the matter is now at the Limpopo High Court’s local division in Thohoyandou. 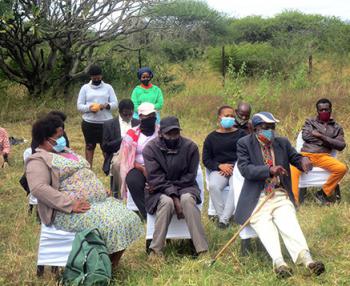 Some members of the Mamphodo Mushasha Begwa Community Property Association (CPA), known as the Concerned Group, recently got together to discuss issues regarding the CPA. William Ramurembiwa (88), sitting in the front (right), is the oldest beneficiary and says that he was born and raised on the farm.