Meulbos now a dumping site for dead and dying dogs?

The inhumanity of mankind never ceases to amaze. On Tuesday morning, the Zoutpansberger received another report of a large-breed female dog dumped next to the Meulbos dirt road just off Forestry road in Louis Trichardt.

A couple of months ago, a dog was found in the same vicinity with her front and hind legs tied together with cable ties. Fortunately, she was found before dying of starvation and thirst and has since been adopted by a loving family from Pretoria through the intervention of the Louis Trichardt SPCA.

Unfortunately, the Boerboel cross-breed found on Tuesday morning was less fortunate. She was already dead, and she appeared to have been about due to deliver puppies. No outward indication of the cause of death was apparent, but she had clearly been dumped there late on Monday evening or early on Tuesday morning. Again, thanks to the intervention of the local SPCA, the dog’s carcass was removed and destroyed correctly not to pose a health risk.

Some initially feared that she might have been Wiggle, an elderly female Boerboel stolen from the Van Wyngaardt family from their home near Shoprite in town a couple of weeks ago. The family’s search continues after they confirmed that the dog found on Tuesday morning was not Wiggle.

The Meulbos dirt road has apparently become popular the last couple of months for all the wrong reasons. Some residents have started using the road as a large-scale dumping site, dumping anything from garden refuse and household rubbish to building rubble. The list of “unique” trash this week also included old and damaged animal head mounts of a kudu and blue wildebeest.

The situation is the same (and just as bad) just up the road, opposite the Forest Hills Lodge on the corner of Barnard and Forestry Road, where household rubbish is now dumped almost daily. “We have caught the culprits numerous times. But then you are treated as the ‘enemy’ for confronting them,” said one irate resident in the area. “I wonder when they will start dumping bodies next to the road,” the resident added.

In the past, the Makhado Municipality has urged residents numerous times to put their rubbish out on the days allocated for municipal refuse removal, or alternatively make use of the new municipal dumping site along the municipal airfield road just behind Tshikota. Some residents seem to fail to understand the basic principle that dumping rubbish in an area not designated for dumping purposes is not only morally wrong but illegal also. “It would seem that some people are trying to turn this beautiful part of town on the outskirts of the Komatiland plantation into a rubbish dump. Most recently, some church sect started using the area for their Saturday meetings. Surely this is illegal? There are no ablution facilities, and the church members use the whole area as a toilet,” remarked another resident. “What happened to law enforcement?” he asked. 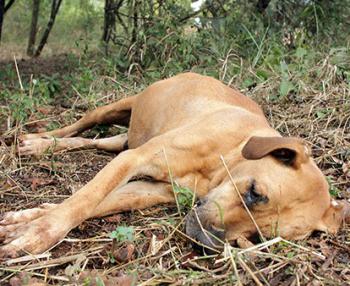 Unfortunately, the Boerboel cross-breed found on Tuesday morning was less fortunate. She was already dead, and she appeared to have been about due to deliver puppies.