He may support Zuma, but won't fuel the looting

A Musina councillor, Fistos Mafela, vehemently denied rumours this week that he was plotting to encourage people to vandalise the Musina Mall.

This comes after fingers were pointing at him for stoking violence and spurring people on to vandalise the mall. The Musina Mall was closed for more than a day while the destructive riots and looting continued in KwaZulu-Natal and parts of Gauteng over the past few weeks. The looting followed shortly after the imprisonment of former president Jacob Zuma.

On Monday, 12 July, an uncomfortable wait-and-see situation existed in Musina and Louis Trichardt. By late afternoon, Makhado Crossing closed its doors to the public for the rest of the day, but re-opened again the next day. As a safety measure, Musina Mall opted to rather keep its doors closed for the whole of that Tuesday. Business resumed as usual after that.

Various community structures in Musina, including security companies, local businesspeople, as well as the taxi association, joined forces with the local police to protect the mall and pledged to stay until the mall’s management felt confident that the situation was under control. In return, the management provided them with food while they guarded the mall – inside and around, day and night.

During an interview with Limpopo Mirror, Mafela admitted that he is an avid supporter of former president Jacob Zuma. “I attended Zuma’s court hearings and was even there to show my support when he was arrested in KwaZulu-Natal.” But, he said, he played no part in any plots of violence. In fact, he said that he had also caught up with community members who had stayed up at night, patrolling the mall to prevent any looting and destruction.

Mafela said that the police had already confiscated his cellphone to check if any communication could be tied to the allegations and had found nothing. “Those who think they have proof can go to the police and report me,” he said.

The MEC for Coghsta, Basikopo Makamu, and the respective mayors for all four municipalities - Thulamela, Makhado, Collins Chabane and Musina - visited all the malls on 17 July to promote a No-Looting campaign. Makamu said that they had been met with true patriotism and civil obedience.

“These unlawful acts are actually meant to cause disunity, aimed to encourage criminality that only results in the loss of lives, livelihoods, and damage to property and essential infrastructure,” he said. “The people of Vhembe and Limpopo have shown that they are good patriots of their province and their country.”

He extended his gratitude to the Vhembe communities for their conduct and for taking a stand to protect buildings, shopping malls and public and private property from acts of looting. 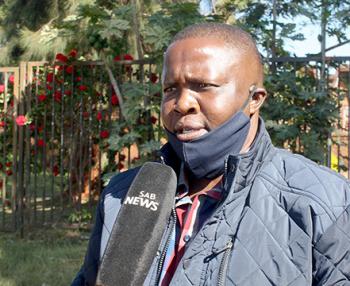