Following Limpopo Mirror’s story last week, “Can the DHA please just fix my ID?” regarding Maria Tshabalala from Elim, whose ID was blocked by the Department of Home Affairs because their system showed it to be a duplicate of someone else’s ID number, Mirror has received some feedback from the department regarding Tshabalala’s situation.

Tshabalala was sent back and forth between Elim Home Affairs and Louis Trichardt Home Affairs after the system apparently showed that her ID number is a duplicate of one of her children’s. In order to issue her with a new, valid ID number, she was required to submit confirmation of birth from the hospital where she was born. Here, unfortunately, she was informed that the hospital had no records dating back to 1968 (the year she was born). She also had to produce an affidavit from her local traditional council’s office, which she succeeded in getting and submitted at the DHA, but this alone, she was told, was not sufficient. She also had to produce a letter from a close relative who is 10 years older than herself.

When Tshabalala went back to the Louis Trichardt DHA on 9 October with the last required document, she was informed that her ID had been blocked, which meant that she no longer had access to anything that required an ID – a matter that concerned her deeply as she needs an ID document to gain access to certain grants, such as her social grant. She also needs it to apply for her youngest son’s ID.

DHA liaisons officer Mr David Hlabane explained the matter of ID duplication. In terms of the Identification Act, he said, all citizens and permanent residents are issued with unique identity numbers that should not be shared with any other person. However, cases have been identified wherein a person shared the same identity number with someone else. In some cases, multiple people shared the same ID number. This, Hlabane explained, could be the result of identity theft, where an ID was acquired illegally or fraudulently with falsified documentation, or where identity numbers had been inadvertently duplicated. In either case, markers are set on the National Population Register (NPR) to block any ID that duplicates another, as a means of ensuring the integrity and credibility of the National Population Register.

“This is the case with Maria Tshabalala, who shares an ID number with another person. Not with one of her own children, though, as alleged. None of her children have duplicate (shared) IDs,” Hlabane said.

DHA advised Tshabalala to visit her nearest Home Affairs office, where she will be assisted to complete the applicable forms to fix the problem. “She will have to submit supporting documents, such as copies of the ID, as well as copies of her parents’ IDs. The officials will then guide her through the process to ensure a speedy resolution,” Hlabane said.

The question remains why Tshabalala was not properly informed about all the specific documents required from the start, instead of being sent back and forth every time. “No-one once mentioned the copies of my parent’s IDs, or the forms that have to be completed. Every trip costs me money, which I now don’t have because I can’t access my meagre income without an ID,” she said. 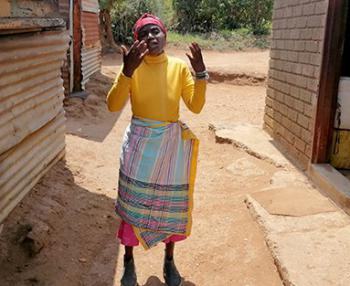 Maria Tshabalala is hopeful that the problem around her blocked ID number will soon be resolved. Photo: Bernard Chiguvare.