Death of nurse leads to picketing outside court

Musina residents are battling to come to terms with the level of crime in Musina. They claim that several lives were lost in the recent past. The level of crime has caused community members to picket outside the Musina Magistrate’s Court on Wednesday, 15 December, following the death of Malakia Vhutshilo Vele, a nurse at Nancefield clinic.

A police report states that Vele’s wife, Clementine Mangena, had called them on 12 December, saying that her husband was locked in a shack in Matswale. On their arrival, the police found Vele lying on his back. He was rushed to Musina hospital for treatment, but passed away at about 17:00 the same day.

Sam Itani Ndou (38) was arrested by police on suspicion of murder. He appeared in the Musina court on Wednesday (15th), but his case was postponed to Monday (20 December). He remains in custody. A charge of kidnapping was apparently also added to the case.

Wednesday’s hearing was also attended by Cllr Nkhanedzeni Godfrey Mawela, the newly elected mayor of Musina. After the court session, Mawela told the crowd that members of the community were tired of such criminal activities in Musina. “If the law becomes soft on criminals, then we lose our freedom to criminals. We are not going to allow them to give bail to the suspect,” he said.

The widow, Clementine Mangena, said she was still in shock and unable to come to terms with the situation. “Something has gone wrong in Musina. This is not the Musina we used to know. The crime rate has gone to unprecedented levels.”

“Nearly every week we lose lives. I am really saddened by the passing of Vele. He was my best friend,” said councillor Edward Nkata. He said that Vele had dedicated his life to service in the community. “After graduating as a nurse, Vele got a job in Louis Trichardt, but he sought a transfer to Musina. He is that person who had people at heart,” said Nkata.

Several Musina residents picketed outside the court holding placards reading, “Justice for Vele”, “#No Bail” and “Justice must be served.”

Vele was buried on 17 December at Dzimauli village. 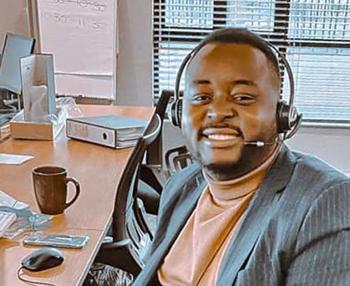 The late Malakia Vhutshilo Vele, who was a nurse at Nancefield clinic, passed away at Musina Hospital on 12 December. Photo supplied.