Ten behind bars for daring attack on police station

Limpopo police have made a major breakthrough by arresting ten suspects believed to be responsible for the daring attack on the Malamulele police station on 21 November 2021. The suspects have also been linked to a series of ATM bombings in the province.

During the attack on the police station, a group of heavily armed suspects stormed the Community Service Centre (CSC) at the police station, robbing members on duty of their firearms and locking them in the back of a police van. They then proceeded to take R4 rifles, pump action shotguns, pistols and ammunition from a police safe and left the station after locking the gate. The suspects then proceeded to rob the nearby businesses.

A dedicated team of investigators, comprising members from the Directorate for Priority Crime Investigation (Hawks), Crime Intelligence, Limpopo Tracking Team, the Provincial Investigations Unit and other operatives were assembled to track down the robbers.

“Ten suspects were arrested … on Wednesday, 19 January, following intensive investigations conducted by the said team. Seven of the suspects were found in their hideout at Medinyeng Village near Kgapane under the Bolobedu policing area outside Tzaneen, Mopani District and the other three were arrested at a lodge in the Dwarsloop area outside Bushbuckridge in Mpumalanga Province. This after information was received about these suspects intending to commit ATM bombings in the Mpumalanga Province,” said provincial police spokesperson Brigadier Motlafela Mojapelo.

According to Mojapelo, preliminary police investigations have positively linked the suspects with several ATM bombings and armed robberies in the province, including the recent incident at a filling station near the Capricorn toll gate along the N1 North under the Botlokwa policing area. During the incident, a police warrant officer was shot and wounded. The suspects were also positively linked to an incident where a police sergeant, also attached to the Botlokwa police station, was robbed of his service pistol, R5 rifle and bulletproof vest.

“Two motor vehicles, a Toyota bakkie and Mercedes Benz, which were reportedly used to commit these crimes were also seized. Police investigations have already begun to circulate them to determine whether they are stolen or not,” said Mojapelo.

At the time of going to press, the suspects aged between 30 and 48 were scheduled to appear in various magistrate courts across the Limpopo and Mpumalanga Provinces facing charges of unlawful possession of firearms and ammunition, the possession of explosives, conspiracy to commit crimes, attempted murders, robbery with aggravated circumstances, carjackings and an attack on a police station.

“The meticulous investigations and tireless efforts of these members [Special Task Team] are highly commendable. I am ecstatic that the suspects who are allegedly responsible for the attack on our members, undermining the authority of the State and subsequently tormenting our communities, will finally face the full might of the law. We will also ensure that all the remaining suspects are apprehended and firearms recovered,” said provincial police commissioner General Thembi Hadebe following the arrests. 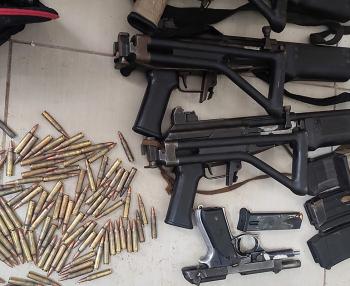 Some of the guns recovered by police following the arrest of the ten suspects. Among them were R5 rifles and pump action shotguns stolen during the attack of the Malamulele police station. Photo: Limpopo SAPS.