'Let us embrace each other as Africans' - SABC Livhu

Livhuwani Madadzhe, popularly known as SABC Livhu in the entertainment arena, is regarded as one of the most controversial comedians in Vhembe. Years ago, he raised eyebrows and became the talk of the town after he had allegedly faked his own mother’s death and erected a tombstone for her. However, all that has changed. Today he is cementing his status as a man of the people who has already touched many lives.

Madadzhe has been involved in charity work, donating food parcels and also building houses for the needy over the years. On Saturday, 7 May, he, along with friends Frank Mboswobeni Mulugana, who is known as 30 Cent, and Abrigen Thomani Mahodze, took to the streets of Thohoyandou, making stopovers at public places such as taxi ranks and interacting with commuters and shoppers to make an important statement.

Dressed in Nigerian traditional garb, they called on communities to welcome the foreign nationals living among them. “We are here on a mission to call for peace and harmony between our communities and the foreigner nationals who live among us. We have watched with disgust the bad treatment meted out to our African brothers from other parts of Africa, who are being treated badly, attacked, and killed by our fellow South Africans. We are here to remind our brothers and sisters that we are one. We are all Africans, and we should enjoy the same rights. We are not saying we should allow undocumented foreigners to cross the borders illegally. There should be order, but we should live together as one,” he said.

Madadzhe said that for locals to accuse foreigners of “taking their jobs” was ridiculous. “How can you accuse these people of taking your jobs when you sit at home? These people are doing the menial jobs that locals do not want to do. Go to the bushes, you will find them making mud bricks to sell as a means of living. Where are our people in such initiatives? Let us embrace each other as Africans. We are one, and we are brothers and sisters,” he said.

Mulugana ’30 Cent’, who is an actor, said they felt they could not keep quiet any longer while things were not going right. “Let us all live together in harmony.”

Mulugana and Livhu have in recent times been very critical of singer Makhadzi’s music and lyrics. “To our musicians we say: please compose songs that have constructive messages and do not feed our people garbage without morals. What future are we building for our children through that?” 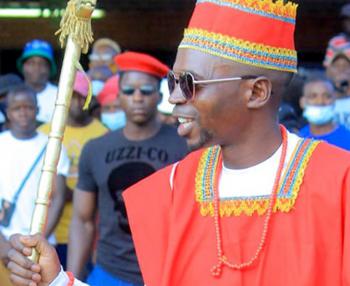 Local comedian SABC Livhu is leading a campaign to encourage locals to live in peace with foreign nationals. Here he is seen addressing a crowd in Thohoyandou. Photo: Elmon Tshikhudo.