The natural order of things seems to have been disturbed at the village of Lwamondo, outside Thohoyandou, as strange stories continue to emanate from it.

This is the same village where, only last week, this newspaper reported on a family who had exhumed the body of a deceased loved one with the hope that he would be alive, only to find a doll inside the coffin. Or so the family members believe.

This week brings another shocking instance from the village as staff members at Munna Ndi Nnyi Men’s Forum and its founder, Mr Bardwell Mufunwaini, started accusing each other of witchcraft.

On Tuesday, 10 May, the situation at Munna Ndi Nnyi Men’s Forum’s offices in Lwamondo was tense with allegations and counter-allegations.

Some of the women who work for the forum were apparently busy cleaning the yard when they came across what they believed was muti buried in the ground at different spots. Among the items that were apparently found were small horns, stones and fabrics normally used for ritualistic purposes.

Ms Fulufhelo Tshikunde, who works at the office, said she was the one who first came across the items. “I was so shocked, I just froze and called a colleague, Ms Tshililo Mamphodo, to witness what I was seeing. There were red and yellow fabrics, which indicated that they were still new and might have been put there recently. The whole staff came, and we were all shocked and afraid,” she said.

Ms Hulisani Mushoma, who was also present when the disturbing find was made, said she had no doubt that the items were linked to an ongoing fight between the women and Mufunwaini. “I have never seen something like this in my life. This is scary. It is meant to drive us out and force us from this premises, but we will not move, no matter the threats. We built this organization to where it is today, and no one will move us from here. We are convinced the Doctor* has something to do with this. He was seen lingering around the building with another man at night. He knows what is actually happening,” she said.

Mufunwaini was adamant that the whole incident was a setup. “I hired these women as volunteers, but now they have turned against me. There are so many bad things happening to me. The other day I found muti in my car, and I have been threatened with death. I know nothing about the muti found in the yard. They and their prophet set everything up to tarnish my name. They want me out of the organisation, which I started and built up. I have put everything in the hands of God,” he said.

As things stand, no peace reigns in the organisation as the women threaten to spill more beans.

*Mufunwaini received an honorary doctorate from Unisa in 2016. 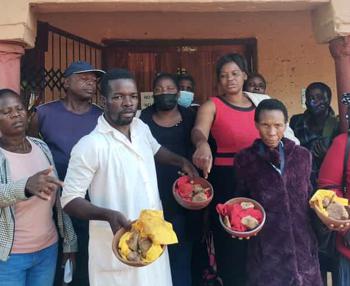