Juniper hails from the rural village of Ha-Khakhu. He started his education at Madala Primary School and finished matric at Mathede High. In 1997, he started his radio career as presenter and producer of a talk show programme at Univen FM, where he later became the programme manager before he joined the South African Broadcasting Corporation (SABC) Limpopo in 2000.

From 2001 to 2005, Juniper worked as a producer of different programmes at SABC’s Phalaphala FM, where he was involved in audience research and presented educational radio programmes, until he joined the University of Limpopo in 2021.

He holds BA a qualification in communication science from UNISA, Hons (media studies) from the University of Limpopo and an MA (communication, media and public relations) from the University of Leicester in the United Kingdom. His experience in higher education includes serving as an online tutor in communication science at Unisa, and at Univen as a part-time lecturer in radio broadcasting studies. He has presented two conference papers for his PhD thesis and has been supervising honours students.

Juniper’s study examines the relevance of community radio’s economic empowerment programming at three radio stations in the Limpopo Province, namely Moletjie FM, Sekgosese FM and Univen FM. The study notes that community radio as a technology has the inherent potential to facilitate knowledge and skills transfer for economic empowerment to target communities in South Africa.

Notwithstanding the sector’s relevance and positive impact through its diverse programming formats, it encounters challenges in the programme formulation process, design and implementation. This is largely owed to limited stakeholder involvement, lack of audience research, inadequate funding, lack of relevant skills among programmers and absence of programme evaluation. This has a negative bearing on the quality of economic empowerment programmes offered by the community radio stations in the province. Subsequently, the study has developed a self-designed economic empowerment programming model (EEPM) based on the existing institutional and policy framework to enhance the effectiveness of radio programming in the sector.

Juniper said that obtaining his doctorate had not been an easy road. He expressed his appreciation to his family for their support regarding his achievements. “Growing up in a disadvantaged family background was not easy, but I am happy that I made it. Young people, don’t ever use your poor background as an excuse for not going to school and not aiming for a brighter future,” he said. 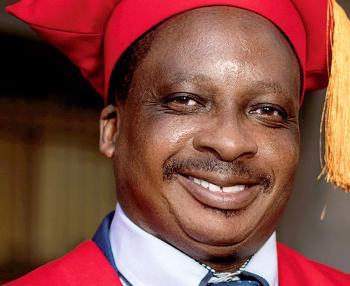 Dr Wonder Juniper obtained his PhD in media studies at the University of Limpopo on 7 May 2022. Photo supplied.