The MEC for the Department of Co-Operative Governance, Human Settlements and Traditional Affairs (CoGHSTA), Mr Basikopo Makamu, urged royal families to resolve problems pertaining to the throne in a peaceful manner - not through court cases.

“It is no secret that the royal family of Khakhu has been overwhelmed with division and disputes over the inauguration of the new senior traditional leader, Thifhindulwi Khakhu, today. It reminds me of similar divisions that challenged the Rammbuda family in the 1800s, when these same divisions turned brothers against each other and tore the tribe apart. The rivalry between Vele Rammbuda and Tshikosi Rammbuda over the throne had very bad and long-lasting costs for the children and great-grandchildren of both brothers,” said Makamu.

A proverb exists that says “Vhuhosi vhunaka u vhangwa”, meaning that disputes over the throne is normal in the culture of the Vhavenda nation. So too the Khakhu royal family had been involved in deep chieftain disputes before Thovhele Khakhu’s inauguration.

“It is worth noting, however, that in the years that followed disputes for the throne in the Khakhu Royal Council, the royal family stabilised itself and grew unity. Along the years, it has been able to swiftly replace its senior traditional leader (Thovhele) with agreement and ease. The stability birthed major developments under different senior traditional leaders,” Makamu said.

“We know well that the responsibility of the senior traditional leader and his council unites the community. It also fosters social cohesion and community building. We urge Thovhele Khakhu now to do the same in his communities. He and his council must build on the development progress that has been left behind by this former senior traditional leader, Thovhele Ratshibvumo Khakhu.”

Thovhele Mphaphuli wished the new senior traditional leader the best on his tenure and urged him always to pray and seek wisdom from God to rule without taking sides. 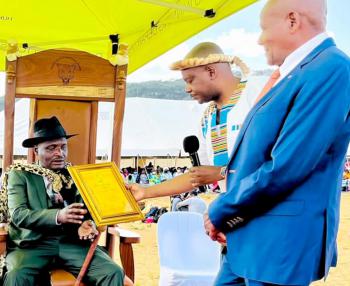