The death of a 23-year-old man after a drinking spree at a tavern in Mashamba has placed the focus once more on the dangers of these institutions and the reckless drinking competitions that are being promoted. The young man died shortly after he had drunk a whole bottle of liqueur in less than two minutes

The incident occurred just before midnight on Sunday, 10 July at the Blue Corner Tavern in Mashamba. The deceased, Mukovhe Rasethana, allegedly took part in a drinking competition, where competitors were dared to down a bottle of Jägermeister in one go. The prize for anyone who could do that was R200.

The competition was promoted on the tavern’s Facebook page as a fun event. “Fun times … Drink and finish this Jägermeister without break and get R200,” the earlier entry reads. Later that night, this post appeared on the social-media page: “Someone surprised us tonight. Record breaker, finished it in one minute.” However, these posts were removed when it became clear that Rasethana was in trouble.

An eyewitness confirmed that the young man had finished the bottle in less than two minutes. “After a few minutes, he started to vomit, and then he collapsed. We poured water on him, but he was clearly not well. He was rushed to the clinic, which is about two kilometres away, but by the time they got there, Rasethana was certified dead,” the eyewitness said.

The tavern was temporary closed after this incident but opened again a few days later.

While many are still waiting for the autopsy to determine the cause of death, the question remains whether all that alcohol could have been the reason he died.

The dangers of alcohol poisoning are well known but are seemingly disregarded by many binge-drinkers. Consuming too much alcohol can be lethal, but exactly how much alcohol would kill one depends on factors such as weight, gender and general health.

According to www.healthline.com, a site advising people on medical issues, what is important is to first understand what constitutes a drink before determining how many drinks would kill a person. A “standard drink” contains around 14 grams of pure alcohol. That roughly translates to one 350 ml can of beer (at 5% alcohol), a glass (150 ml) of wine (at 12% alcohol), or a shot (44ml) of distilled spirits.

As a general rule, one standard drink will increase one’s blood-alcohol concentration (BAC) by 0.02%. So, while only four drinks might be required for you to be legally intoxicated, quite a bit more is needed to kill you. The average person would have to consume 25 standard drinks to reach 0.40 percent BAC, which would be considered lethal.

A bottle of Jägermeister (35% alcohol) is normally 750ml. That means that a person who drinks a bottle in one go would have downed the equivalent of roughly 17 drinks. For someone of about 70kg in weight, that amount of alcohol could very well have killed him.

Regular customers at the Blue Corner Tavern say that the tavern is famous for its competitions and specials on liquor. The question remains whether, by encouraging customers to engage in dangerous activities, the tavern owner and staff could be held liable for the death.

A legal practitioner, Advocate Mpho Nefuri from Nefuri Attorneys, reckons it may be difficult to prove that any crime has been committed. “The owner of the tavern cannot be held criminally liable for Rasethana’s death. He (Rasethana) was not a minor and he was not forced to drink it,” she said. 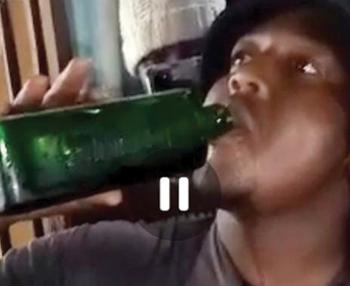