King Makhosonke happy as Ndebele will be taught a Univen

King Makhosoke II of the Ndebeles expressed his happiness on Friday after the University of Venda agreed it would teach isiNdebele and would also promote the language through research and keep materials about the language in its library.

Speaking at the historic signing of a memorandum of understanding (MoU) between the university and the Manala Kingdom of the Ndebeles, the king said it had been of concern to him that isiNdebele was one of the 11 official languages but remained marginalised. He said the signing of the MoU had put an end to this fear.

“We thank the university for allowing our language to be part of the programme. As a nation, we are proud because it means a lot to us,” said the king.

Thovele Toni Mphephu Ramabulana also welcomed the move and praised the university for promoting African languages. He said the name of the university denoted its location, but it had to cater for all African language groups. He praised basic education minister Blade Nzimande when he recently said the development of African languges was necessary for human rights and human dignity.

“We are aware that, as a university that ensures the teaching and promotion of African languages, you even crossed the borders and forged partnership with the University of Zimbabwe by teaching Tshivenda at that university,” he said.

King Makhosoke II said although isiNdebele was one of the 11 official languages in South Africa, it was not treated as such and it was not well developed like other languages. He said after a snap survey had been conducted, it was found that only education would be able to close all the gaps.

Prof Mokgale Makgopa, dean of the school of human and social sciences at the university, said the university was approached by the Ndebele kingdom, which faced challenges about its language. “We decided to come to the party because of our geographic position and the multilingualism of our society,” said Makgopa. 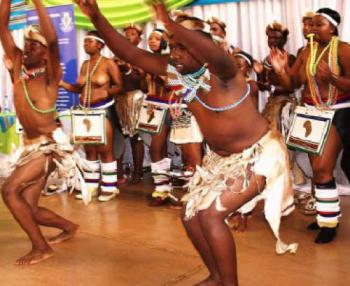 The signing ceremony was a traditional affair, with the Venda and Ndebele traditions fighting for supremacy. Here, a Ndebele entourage shows the locals a step or two during the function.