Land should not be auctioned, but made available to 'Missing Middle'

The Economic Freedom Fighters (EFF) in Makhado and the Sinthumule-Kutama Crisis Committee (SKCC) object to the selling of 166 residential plots at Tshikota Extension 1 and 695 other plots in Louis Trichardt Town that are being auctioned off by the Makhado Municipality.

This comes after an advertisement of the public auction was published by the municipality last month.

“Our objection is not to the sale, but the method used to sell it by auction to the public,” said Anthony Matumba, an EFF representative on the Makhado Municipality’s executive committee.

The SKCC echoed the same sentiments, saying that the sale should not be done through auction, but rather in accordance with clause 4.5 and 4.10 of the Revised Makhado Local Municipal Land Sale and Lease Policy Resolution, with the sole intention of empowering previously disadvantaged South Africans to acquire stands.

Clause 4.5 makes provision for the selling of land on certain conditions to a defined group of people. It entails compiling a waiting list for the sale of vacant residential sites to persons who comply with pre-set criteria for eligibility. An advert is placed in the local newspaper calling on residents to enlist their names in the municipality’s database for consideration. Sites then get services and get valued at a market-related price. The properties must be sold on a first-in-first-out basis by using the database, which must be open for public inspection.

To try and prevent what is often referred to as “fronting” when sites are sold to historically disadvantaged individuals, such purchasers may not dispose of the property for a period of ten years.

According to the EFF and SKCC, a high demand for residential stands exists from previously disadvantaged South Africans, and because of this high demand, some Makhado residents are led to occupy municipal land in Tshikota illegally.

“These people are categorized as the Black Missing Middle. They earn too little to qualify for a bond, and too much to qualify for an RDP house. As a result, they succumb to rental arrangements because they can’t buy houses on the private market. But they have enough money to build if they are afforded the chance to buy empty stands at reasonable market prices,” said the SKCC. 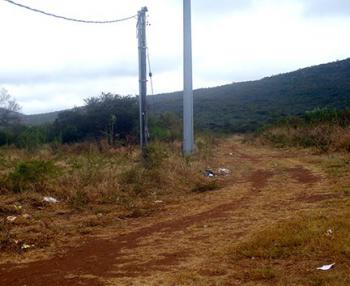 The Tshikota land where 166 residential plots are being auctioned off to the public. Photo: Bernard Chiguvare.