Good things come to those who wait

“Indeed, good things come to those who wait,” he believes. “When I moved to this place 35 years ago, it was very bushy and far away from other settlements in this village. I built my homestead, and it was the only one here in the bush for over 15 years. I had to cut down trees and fill up huge dongas to make way for my car, so that I can drive to my homestead. I used to fetch water at the local Mudaswali River because there were no taps, and I had to drive long distances to buy necessities like bread and maize meal.”

A retired school principal, who had been in the teaching profession for 40 years, Phaduli says he would use his leadership skills to turn the village into a pleasant, peaceful and developed place to live. “I am happy that I’m recognized here today for my pioneering spirit. Through my cooperation with our senior traditional leader and various stakeholders, Mutulagole now has many households, electricity, roads and water taps. I thank our local traditional leader for having trust in me, and I commit to always availing myself for anything that needs to be done to improve the lives of our people.”

Musanda Vho-Mutulagole Nyamande said that Phaduli deserved this great honour bestowed on him as he was a rare breed of community builder. “This area was a dense bush when he first came to live here in 1986, after he was given permission by my late father, Mutahabvu Vho-Ndidivhani George Nyamande. Phaduli approached many people to come and live here and today we have about 200 households. Realising that the place is expanding and that we need a leader, no one ever objected when we decided to bestow this great honour on him. We need to recognize hard workers while they are still alive, rather than to talk about them when they have passed on. There is no doubt that when the history of Matangari is written, David’s name will appear in a special chapter. We have trust in him, as he had already proved that he can lead without expecting anything in return.” 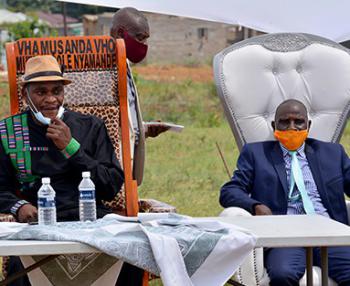