Nineteen-year-old Zelda Mutshotsho from Vuwani became the first ever Miss Matsila Online Radio on Saturday, 18 June. She was crowned during a ceremony held at the Joe Matsila Guest House in Matsila, outside Vuwani.

The pageant is aimed at advancing social cohesion, but also to instil pride, hope and confidence in the youth. The event saw youths from Matsila and the surrounding villages coming together under one umbrella, cheering and exchanging ideas.

Mutshotsho was ecstatic over her title and said that she wanted to be an example to girls everywhere. “The Miss Matsila Online Radio title has been one of the greatest achievements I have accomplished so far. I’ve always wished to own such a title since my childhood. I was not really motivated to try until I came to realise that motivation was not what I needed, but the courage to step up, dream bigger and believe in myself.”

She said that the competition had definitely boosted her self-confidence to move forward, and that nothing could stop her now from realising her dream of winning the Miss Universe title one day.

The queen was flanked by her first princess, Yaela Bologo, and second princess, Shalati Baloyi.

The manager of Matsila Online FB Live Radio Station, Mr Marubini Siphugu, congratulated Mutshotsho on winning the title. “We are really proud of what Mutshotsho has achieved and we are confident that she will represent Miss Matsila Online Radio with dedication and excellence,” he said. 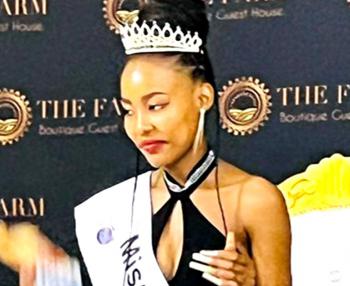