Black Leopards tasted their first defeat in the Absa Premier League this season when Orlando Pirates beat them 2-1 at the Peter Mokaba Stadium on Tuesday.

Pirates took the game to Leopards from the first whistle, with their strikers, Thamsang Gabuza and Vincent Pule, pressing hard in search of an early goal. They came close to scoring in the seventh minute, when Gabuza's shot was saved by Leopards keeper Rosthidzwa Muleke. He also missed the target two minutes later after beating two defenders in a row.

Leopards' bulldozer-defender, Thivhavhudzi Ndou, scored an own goal in the 34th minute when he tried to clear the ball. After the goal, the Pirates striker Thamsang Gabuza went off the pitch and threw his jersey to the fans who were shouting for his replacement. The referee then gave him two yellow cards, one for leaving the pitch and one for taking off his jersey. As the two yellow cards culminated in a red card, the Buccaneers were forced to play the rest of the match with 10 players.

Leopards did not lose hope, despite conceding an own goal. They continued to play like a team, with their midfielders dishing out some telling passes to the strikers. Leopards’ midfielder, Khuliso Mudau, was given yellow card for rough play shortly before the end of the first half.

Leopards left Khuliso Mudau in the dressing room and brought on Joseph Mhlongo for the second half. Pirates scored the second goal via Vicent Pule, who finished off a square pass from Ben Motshwari.

Leopards introduced Themba Ndlovu and Alton Kapinga for Eden Nene and Karabo Tshepe. Their introduction changed the complexion of the match as Leopards put Pirates under huge pressure.

Joseph Mhlongo then scored for Leopards with a balloon shot when the keeper of Pirates, Siyabonga Mpotshane, misjudged the flight of the ball.

In the last minutes, Themba Ndlovu of Leopards was brought down inside the penalty area and the referee indicated that the players must play on. The Leopards players appealed for a penalty, and some of them surrounded the referee in disgust for not pointing to the white spot. 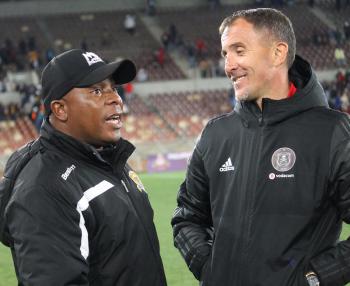 Mako Paseka of Pirates clears the ball, with Alton Kapinga running towards the action.

Thamsang Gabuza Orlando Pirates controversially left the field and was later red-carded for his behaviour.