Fighters through to Mulindavhathu final

Rambuda Young Fighters secured a place in the final of the Mulindavhathu Soccer Challenge by beating Tshandama Try Together 2-1 at the Khubvi Benjies grounds on Saturday.

Fighters approached the game aggressively with their strikers, Pfunzo “Shavy” Tshikotshi and Rudzani Thabo, giving the defence of Tshandama no time to breathe,

Try Together tried to neutralize Fighters through their dangerous tackles. The referee did not allow any of the culprits to go unpunished. He flashed two yellow cards to playmaker, Shumani Alilali, and Takalani Netsianda within the first six minutes. Fighters took the lead in the 14th minute. Rudzani Thabo caught the Tshandama keeper, Khumbelo Mulaudzi, napping with a half volley.

Rudzani Thabo of Young Fighters was booked for retaliation in the 18th minute. He was tackled from behind by Tsimbe Thomoli and responded by kicking Thomoli.

Fighters increased the lead in the 26th minute. Rotanganedzwa Siobo tried his luck from the left corner with a half volley. The ball landed inside the box, resulting in a heartbreaking scramble at the goal mouth. Rofhiwa Nethononda gave the ball the final touch to give his side a 2-0 lead.

Try Together pulled one back seven minutes towards the end of the first half. The keeper of Fighters, Faith Gandamipfa, mishandled the ball, following Muthusi Tshihume’s long-range attempt. Patrick Andje, who was waiting next to the goal line, found it as a precious gift and he blasted in a rocket to bring the half-time score to 2-1.

Tshandama took the game to Fighters in the last half. It came as no surprise when Fighters conceded six corner kicks within a short space of time. 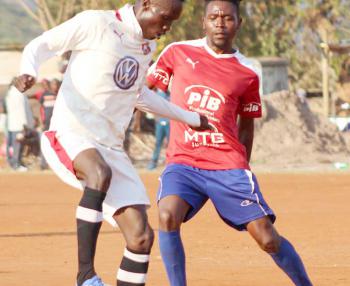 Rudzani Thabo of Fighters controls the ball, while Khuliso Mafanedza of Try Together is ready to intercept.