Residents to revive a team

The prospect of quality football in the dusty village of Ha-Mutheiwana in the Tshimbupfe area looks much brighter, following an alliance by residents to revive the team once known as Tshimbupfe Advance Punchline.

When people familiar to the area think of football teams of note in the Vuwani area in the 1990s, they will automatically think of Tshimbupfe Advance Punchline and their coach, Aifheli “Chapiro” Gabara.

Now, residents in the village and even those based in Gauteng will see the team register to play in the Makhado Local Football Association next season, but this time around as Mutheiwana Advance Punchline.

An interim technical team has been structured and a formidable squad comprising talented young players from the village has been assembled. Last Saturday, the team’s interim structure officially received the team’s new kit and football nets, thanks to the contributions of residents.

Former Limpopo Mirror reporter Mr Nthambeleni Gabara represented the team during the event and received the new kit. According to Gabara, the interim technical team is going to gear up the team’s preparation. “We hope that the technical team will arrange friendly matches as part of preparing the team ahead of the new season. It was very painful to witness the team collapse more than a decade ago.”

During the years they were on top, Punchline beat their opponents by more than seven to ten goals and even when they conceded goals, it would not be more than two goals. “At home, it was always a baptism of fire for their opponents, making their home ground known as the soccer field of pain,” he said.

The revival of Advance Punchline will also help cement good relations among residents of Ha-Mutheiwana. “As residents, we view football as a powerful tool to support conflict prevention and we are optimistic that the revival of our team will strengthen social cohesion,” he said. 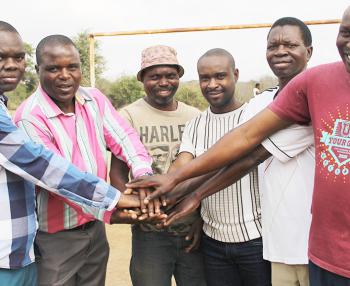 The Advance Punchline players with their new soccer kit.