No peace for Brave Lions

Thengwe Flying Peace smoked no peace pipe with Ngalavhani Brave Lions and brutally walloped them 4-0 in the final of the MI Nefale Attorneys Soccer Tournament at the Tshishivhe grounds on Sunday.

The first half was characterized by wasted scoring opportunities as both sides looked hungry for goals. Brave Lions could have been the first to open an account in the 14th minute, but their striker, Lutendo Kwinda, was unlucky. He beat the offside trap and shot wide from the edge of the box with the keeper already beaten.

Sedzani Makumbila, the Flying Peace left winger, was reprimanded with a card for ignoring the referee’s whistle four minutes into the last half. Makumbila kicked the ball away long after the referee had blown the whistle for an offside. Although he was cautioned with a card, Makumbila did not lose his original fighting spirit as he scored a brace in the game.

His opening goal came in the 64th minute. He beat everyone, including the Lions’ keeper, Ronewa Mavhungu, and tapped the ball into an empty net. Brave Lions replaced Ashi Tshifularo with Ndamu Mukwevho soon afterwards. Makumbila completed his brace in the 70th minute. He blasted in a rocket, following a scramble within the box.

Martin Nefale scored the fourth goal for Flying Peace in the 79th minute. 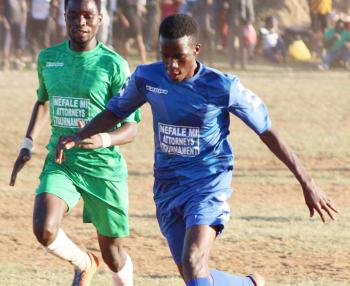 Martin Nefale of Flying Peace kicks the ball, while Phindulo Phupheli of Brave Lions is on his heels.