After losing two league matches in succession, Tshakhuma Tsha Madzivhandila (TTM) restored their pride by crushing Ubuntu Cape Town 3-0 in their Nedbank qualification-round match at the Thohoyandou Stadium on Sunday.

The local lads approached the game aggressively, with their strikers giving the visitors’ defence no time to breathe.

Carlington Nyadombo, the TTM centre back, watched the game from the grandstand. He was still serving his suspension after receiving four yellow cards in previous matches.

Realizing that TTM were unstoppable, Ubuntu tried to neutralize them by demonstrating their rough skills. That prompted the referee, Mr Siyabonga Nkomo, to flash two yellow cards in quick succession. Siyabonga Madikane was booked for tackling TTM’s dribbling wizard, Onyedikachi Ononogbu, from behind in the 26th minute. Rodwill Bezuidenhout was reprimanded for a similar offence two minutes later.

Ubuntu lost their original fighting spirit after the two yellow cards. TTM capitalized and scored two goals before the end of the first half. Edward Maqele was on target in the 40th minute, following a neat pass from Onyedikachi Ononogbu.

Their third and final goal came on the stroke of half time. Ndabayithethwa Ndlondlo dribbled past two defenders in a row and beat the keeper with a ground cutter.

Waseem Isaacs of Ubuntu was the final player to go into the referee’s book. He obstructed Nhlanhla Mgaga in the 79th minute. Realizing that victory was almost certain, TTM played entertaining football in the last 10 minutes of the game. 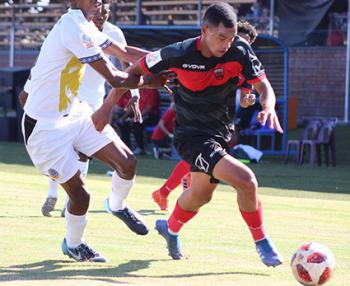 Fawaaz Basadien of Ubuntu kicks the ball, while Tshepo Makgoga of TTM pulls him back from behind.