Had they not conceded a late goal against Cape Umoya United in their opening GladAfrica Championship League match at the Thohoyandou Stadium last Saturday, Tshakhuma Tsha Madzivhandila (TTM) would be shining on top of the log by now.

They beat the Capetonians 2-1, however, and now Vhadau Vha Damani are in the second spot on the log.

When asked about his impression of the game, Mr Momcilo Medic, the coach of TTM, said that he was happy that they had managed to grab full points in their opening match at home. He said that the fact that they had been playing against a “very stubborn” team made him feel that his charges were ready for any opposition. He stressed the fact that it was good for them to play against the best sides at the beginning of the season, so that they could see their loose ends and tighten them when there was still time.

Medic further said that the fact that their weekend fixture against Uthongathi FC, which was scheduled for tomorrow at the Princess Magogo Stadium in Durban and has been postponed to a later date, was a blessing in disguise to them. He said they would organize a friendly match this weekend where they would put several of their new signees to the test.

He stated again that he might change the starting lineup a bit when they host Maccabi FC at the Thohoyandou Stadium next Saturday, 31 August. That, according to him, will depend on the impression he will get from the new signees in the friendly games.

Wonderboy Makhubu and a substitute, Nhanhla Mgaga, scored for TTM in the second half. The visitors from the mother city pulled one back through Muzomuhle Khanyi in the dying minutes of the game. 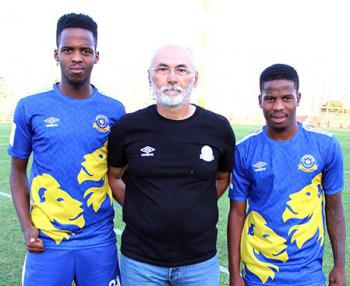 Wonderboy Makhubo of TTM (left) and Eric Chipeta of Umoya wrestle to win the high ball.